222 – Technology versus labour in agriculture

A key component of the transition from agriculture-based economies to industrial and service-based economies is the substitution of new technologies for labour in agriculture. This reduces the demand for labour in agriculture, and allows labour to move to more productive jobs in manufacturing and services. Western industrialised countries went through this process in the 19th and 20th centuries, and many developing countries, such as those of south-east Asia, have been following in their footsteps in recent decades.

The process doesn’t all go smoothly, and not everyone who exits from agriculture is better off – just think about conditions in the factories of England during the industrial revolution. But in the long term it’s an essential element of improving the quality of life for the great majority of people. 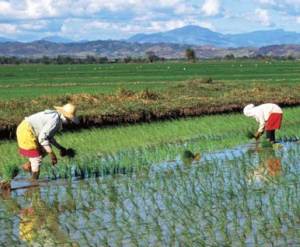 One of my PhD students, Jessie Beltran, did a study that illustrates the latter process beautifully. In the Philippines, there has been increased demand for labour in non-agricultural sectors of the economy. The resulting increase in labour costs has affected rice farmers, who have traditionally relied on a highly labour-intensive form of agriculture, especially for planting and weeding.

Jessie built an economic model of the planting and weeding decisions of Philippine rice farmers and used it to explore the consequences of rising labour costs. The results were just what you would expect. If labour is cheap, the traditional labour-intensive transplanting approach to seeding is the most profitable option. As labour costs increase, direct seeding becomes more profitable because it requires much less labour.

In addition, if labour is cheap and weed numbers are not excessive, it is best to rely on manual weeding, with people pulling up every weed in the crop by hand. However at higher labour costs, application of chemical herbicides becomes the more profitable option.

Both of these changes are occurring in reality in the Philippines. An inevitable side effect in the medium term will be the evolution of herbicide-resistant weeds. At this stage, farmers there have little or no awareness of the risk of resistance, but the first cases of it have already been discovered. It will be only a matter of time before most farmers who use herbicides have problems with resistance, and have to look again at more expensive, less convenient weed control strategies. But they’ll have to do that in the context of high labour costs, so they are likely to employ different weeding technologies, rather than going back to hand weeding.

12 thoughts on “222 – Technology versus labour in agriculture”