Tom Waits has an excellent new album out called “Bad As Me”. It’s classic Tom, with rough, growly vocals delivering stories of wit, wisdom and humanity, in an eclectic array of musical styles. In one song he observes that, “everybody knows umbrellas cost more in the rain”. Economics on a Tom Waits album! But is it true? And if so, why? 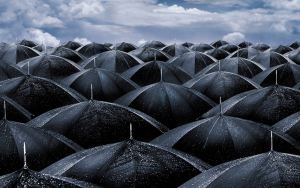 It appears that Tom has an excellent grasp of the basics of micro-economics. His observation is exactly what you’d expect from a simple economic model of the market for umbrellas.

This sort of market model has a demand curve (showing the number of umbrellas that people would want to buy at different prices) and a supply curve (showing the number of umbrellas that umbrella producers would be willing to sell at different prices). If the market price is too high, producers find that they can’t sell all the umbrellas they would like to, so they are prompted to drop the price and reduce production. If the price is too low, producers find that its not worthwhile producing as many umbrellas as people want at that price, so they are prompted to raise the price and increase production.

The end result is that the market price eventually settles where the supply and demand curves intersect, because that is the only situation where there is no shortage or excess of umbrellas. This occurs at price P0 in Figure 1.

Then in comes Tom Waits, singing “everybody knows umbrellas cost more in the rain”. On a rainy day, what changes? For one thing, people who didn’t remember to take their umbrellas with them when they went out have a particularly strong desire for an umbrella. As a result, the price they are willing to pay is probably higher than usual. The demand curve rises from DemandDry to DemandWet (Figure 2).

At the same time, the supply of umbrellas on a particular wet day is likely to be more or less fixed. The upward sloping supply curve in Figure 1 is probably relevant to a long-ish time frame, like a year, but on a single wet day, producers are unlikely to increase their production and get the extra umbrellas into the shops in time to meet the increased demand. This means that the supply curve is more-or-less vertical on that day, meaning that the number of umbrellas available for sale that day would be the same, almost regardless of the price people were willing to pay for them.

Figure 2 shows the result of rising demand and fixed supply – the price goes up (from P0 to P1). The Tom Waits theory of umbrella pricing is looking good.

That’s all very well, but it strikes me that, at least in some environments, the Tom Waits theory of umbrella pricing is unlikely to hold.

If you went to your local shopping mall and found a store that sold umbrellas, do you really think that the price would be higher on a rainy day than on a dry day? I doubt it.

For one thing, I don’t think that stores would find it worthwhile to go through their umbrella stock replacing their price tags day after day depending on the weather.

For another, at least some stores care about their reputations with shoppers, and being caught jacking up their umbrella prices on wet days and putting them back down on dry days could be a recipe for bad publicity if they got caught.

So in that sort of retail environment, I reckon Tom is just wrong.

He’s more likely to be right in a situation where the umbrellas don’t have individual price tags, and where sellers are not concerned about maintaining customer relations – perhaps in a public market where prices are determined by haggling. I’ve just had a week’s holiday in Istanbul, which has many such markets. I’d be pretty confident that, in that environment, umbrellas really would cost more in the rain.

The contrast between a shopping mall and a Turkish market illustrates that the simplest economic supply and demand model is too simple in some cases, as it ignores factors like transaction costs (including such things as the cost of changing price tags) and the value of maintaining a seller’s reputation. The simple market model is a good tool to start thinking about these issues, but it needs additional complexities to be included to be relevant more generally. Many academic economists are interested in what those additional complexities are and how they affect things.