In 2007, the world prices for a number of important food commodities suddenly increased dramatically. Many reasons for the price hike were proposed at the time, but some of them turned out to have little to do with it. One factor that did play a big role was American policy that mandates use of biofuels. 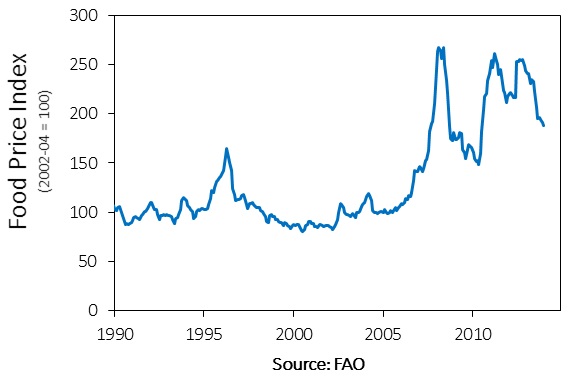 It was estimated that this big jump in food prices pushed an additional 130-155 million people into poverty. People rioted in protest at the high food prices in various countries, including Bangladesh, Mozambique, Egypt, Tunisia, Senegal, Zimbabwe and Haiti.

A number of possible reasons for the price rises were identified, including: 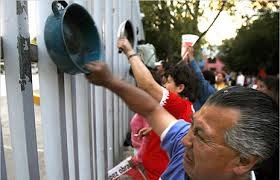 It was felt at the time that it was the combination of all these things that did the damage. There were so many factors thought to have contributed that some described the situation as a “perfect storm”.

However, we now have the benefit of hindsight and it’s clear that some of these factors played little or no role in the price spike (Wright 2014).

It’s true that the oil price spiked in the first half of 2007, just before the food price spike, so there is at least a smoking gun. Higher oil prices would have increased the cost of agricultural production to some degree, and this could have been passed on to buyers. However, Wright argued that this sequence of events (high oil prices followed by high food prices) was largely coincidence, not a causal link. He noted that prior to this event, there was no notable relationship between oil and food prices:

The 1970s oil spike began after the spike in grain prices was well under way, and another huge oil price surge starting in 1978 had no counterpart in the grain market. The sharp but forgotten spike in maize and wheat in 1996 was not matched by a similar movement in oil prices. When energy prices doubled after 1998, grain prices on average barely moved until 2006. (Wright 2014, p. 546).

If drought or adverse climate change was a significant cause, we would have seen significant declines in global food production in 2007-08. People observed that there was a big reduction in Australian grain production at just this time, due to the long drought in the Murray Darling Basin. However, Wright showed that there was no major decline in aggregate global production for any of the three major grains, so other countries must have had production increases that offset Australia’s shortfall. Furthermore, looking at past spikes in food prices, he found that (back to 1962) none of them coincided with large production shortfalls. This is intriguing, because a shortage should in theory cause a price increase, but it seems to have been overwhelmed by other factors in past years at least.

There was “panic buying” by several countries (Bangladesh, The Philippines, Nigeria and some Gulf countries) who increased stocks in an attempt to contain local food prices. This may have made a temporary contribution to higher prices on world markets, but it probably wasn’t a major factor. As evidence of that, I note that panic buying soon ceased, but prices remained high for several years (until about 2014).

A number of countries that traditionally have been exporters of cereal grains imposed a ban on exports during the crisis: Argentina, China, India, Egypt, Pakistan, Russia, Ukraine and Vietnam. This would have reduced the supply of grain in international markets. The World Trade Organisation and International Monetary Fund estimated that prices would have been 13% lower without these restrictions.

Increased demand for food in Asia, especially China, probably contributed. Higher incomes led to higher demand for meat, which led to higher demand for grain to feed to livestock, particularly soya beans. Higher prices for one grain flows through to other grains through substitution in demand. Wright noted that the evidence about the role of higher food demand in pushing up prices in 2007-08 is complex and somewhat confusing, but that it probably did play some role.

Finally, we have biofuels policy, particularly the US policy that caused large volumes of corn to be diverted away from food and livestock production and into the production of ethanol for use as a transport fuel. Although this was ignored by many commentators at the time, it undoubtedly played a significant role in the food price jumps. In addition to pushing up food prices, this policy increased the area and intensity of corn production, which probably led to increased environmental damage in the forms of water pollution, soil erosion and biodiversity loss. And, tragically, even in terms of its contribution to abatement of greenhouse gases, it was (and still is) a very poor policy. The climate benefits provided are small and very expensive.

One lesson from this is that we need to be careful in drawing conclusions about the reasons for changes in market prices. It is easy to be misled by simple correlations, such as that between 2007 oil prices and food prices. A plausible story is not sufficient evidence.

Another lesson is the importance of thinking through policies before committing to them. The failure to do that for biofuels policy in the US and Europe probably resulted in them doing more harm than good.

Wright, B.D. (2014). Data at our fingertips, myths in our minds: recent grain price jumps as the ‘perfect storm’, Australian Journal of Agricultural and Resource Economics 58, 538-553. Journal web site ♦ Ideas page for this paper