In the slopes region of New South Wales, the planting of perennial vegetation is promoted as part of the strategy for salinity management. However, recent modelling has highlighted the need for careful economic and hyrdological analysis to understand where perennials should be established in this region. Poorly sited perennials can result in major economic costs to landholders, major losses of freshwater additions to rivers, and can even make salinity concentrations in the rivers worse. On the other hand, well located perennials can substantially reduce salt concentrations without excessive costs in terms of farm production or river flows.

Modelling by Tom Nordblom and his colleagues allows us to estimate the trade-offs among profitability, water yield and salt concentrations by integrating information on land use, plant water use, rainfall, soils, groundwater salinity, catchment hydrogeology, and economics. 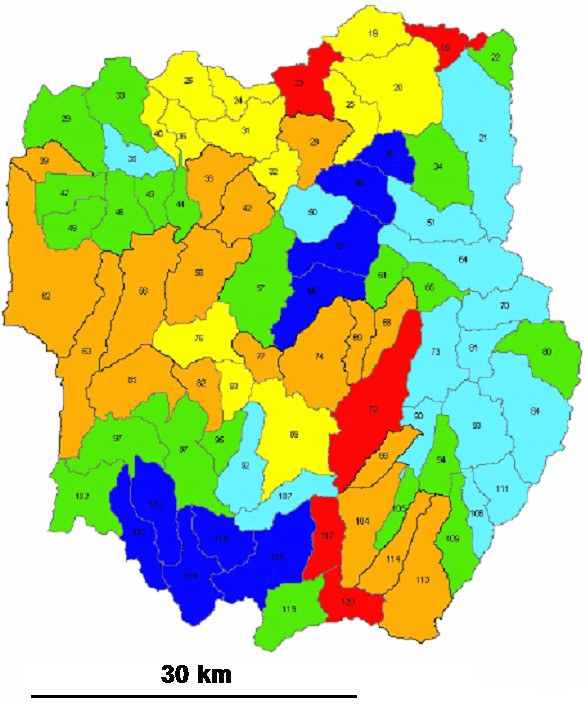 The minimum cost of attaining a specific set of target varies widely, depending on the targets. This is illustrated in Figure 2, which shows results for a mini-catchment of three sub-catchments (one red, one green and one dark blue) having a total of 4700 ha.

Figure 2. Opportunity costs for shifts from current land use (yellow dot) to the most profitable land uses which can deliver target future levels of water yields and salt loads in the river. 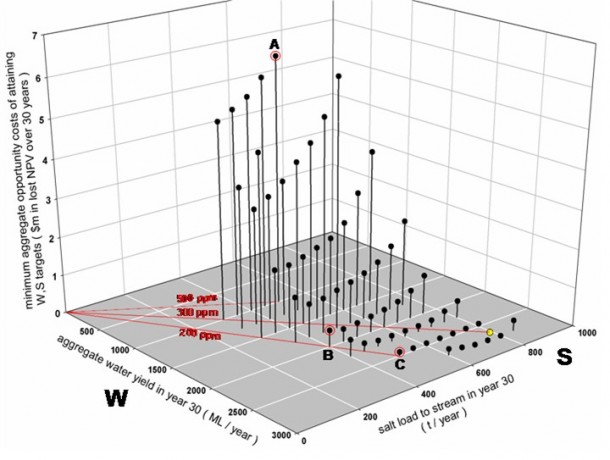 For comparison, the average water yield and salt load levels under current land use are shown by the yellow dot. The height of each bar shows the lost farm profit compared to current land use. The higher the bar, the lower is the profitability of agriculture in that scenario.

In this example, current flows deliver a stream salt concentration of 300 parts per million (ppm). Changes in land use offer a range of 200 to 500 ppm in the future (Figure 2).

Target A is attainable by planting perennials, but, compared to the current set of land uses, it incurs over $6m in cost (lost profits), lowers annual stream flow by 1500 ML and increases stream salinity from 300 to 500 ppm: a lose, lose, lose option.

Target B halves current salt load, costs $0.4m, reduces stream flow by 500 ML, and improves stream salinity to 200 ppm. Target C offers the same improvement in water quality as B but at minimal cost and with little loss in stream flow.

Judging the “best” target is a question of weighing up the agricultural costs against downstream demands for water and water quality. This framework presents to decision makers the full set of tradeoffs on the supply side. Downstream demands for water and water quality by towns, irrigators and for environmental flows comprise the other side of the question. In regions such as the Little River catchment, where flows of fresh water into rivers are significant, a capacity to use such a framework is crucial if resource managers are to avoid the real risk of making river salinity worse while also causing major losses of profits and water flow.

It is important to appreciate that this analysis is specific to river salinity. The issues and the appropriate strategies are likely to be different for management of salinity threats to agricultural land, infrastructure and terrestrial biodiversity.