There are two main criteria used for evaluating projects in Benefit: Cost Analysis (BCA): the Net Present Value (NPV = benefits minus costs) and the Benefit: Cost Ratio (BCR = benefits divided by costs). In what circumstances should you use one of the other or both or neither? It’s a question with quite a complex set of answers.

The advice on this question in BCA guidelines and textbooks is not always sufficiently helpful, or even correct. And there is at least one myth about the answer that is quite widely believed.

Let’s start with a simple case. If the budget available for funding projects is not limited, all projects with NPVs greater than zero or, equivalently, BCRs greater than one, should be funded. In this situation, there is no need to rank the projects, because all good projects can be funded. NPV and BCR give you the same information about whether a project is good enough to fund.

This unlimited-budget scenario is fine for cabinet or the treasury department because they can just generate more tax if it is needed. But for most organisations doing BCAs, their budget available to spend on projects is limited and it does matter whether you use BCR or NPV. 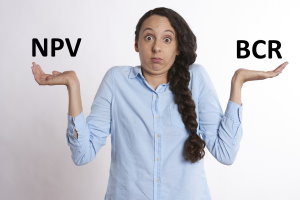 When there is a limited budget, the choice between using NPV and BCR depends on whether the projects are separate, unrelated projects. If projects A and B are separate, unrelated projects, it means that if you did project A, you could still also do project B, if you had enough money. The other possibility is that they could be mutually exclusive, meaning that if you do Project A1, you can’t do Project A2. This latter scenario would be the case where you are evaluating different versions of the same project, and you can only actually do one of them, even if you have unlimited money available.

If we have unrelated projects and a limited budget, what we want to do is rank the projects. We would fund the best-ranked projects up to the point where the available budget is exhausted. And, to generate the largest net benefits overall, the correct way to rank projects in this scenario is by BCR. (See the appendix for a minor caveat.) In that situation, ranking by NPV can give highly inferior results.

There is one more essential piece of information about this scenario: the costs that go into the denominator of the BCR are the costs that would be drawn from the limited pool of funds that are being allocated to projects. Other costs (e.g. compliance costs that will be borne by affected businesses) should be subtracted from the numerator because they are not constraining the selection of projects.

A failure to understand this last point has led to a pervasive myth about BCRs: that they are not reliable because you can manipulate them by moving costs between the denominator and the numerator. You can’t! It is absolutely clear which costs belong where, and only those costs drawn from the limited pool of funds go into the denominator. The myth even comes up in some official government guidelines on BCA (e.g. Department of Treasury and Finance, 2013; The Treasury, 2015). Even the Commonwealth of Australia (2006) specifies the use of NPV and not BCR. This advice is wrong more often than it is correct. One guideline that gets this issue right is New South Wales Government (2017).

To summarise, we’ve identified two simple rules that might be all you need.

NPV/BCR Rule 1. If you are assessing separate, unrelated projects, and the budget for funding the projects is not limited, you can use either NPV or BCR. They tell you the same thing.

NPV/BCR Rule 2. If you are assessing separate, unrelated projects, and the budget for funding the projects is limited, you rank the projects using BCR. Ranking with NPV is not correct.

In the next Pannell Discussion, we’ll look at a scenario where we are assessing different versions of the same project.

If projects have to be funded fully or not at all, and the ranking of projects implied by BCR results in some money being left over, then it may sometimes be optimal to deviate slightly from the project ranking implied by BCR in order spend the left-over money effectively. In practical terms, this is usually a minor issue and can be handled by an application of common sense when the selection of projects is being finalised. You could develop an integer programming model to solve it exactly (see PD324), but a bit of trial and error will probably get you to the same solution more easily.