The ‘real’ price of food (the price with inflation factored out) has fallen through much of recent history. Back in 1995, there was a view around that agricultural commodity prices had reached a turning point and were going to stay high and rise further. I tried to have a bet with a grain price forecaster that real prices would not rise, but he refused. Would I have won?

In 1995, we were doing some modelling of future agricultural production trends based on forecast prices over the following 10 years. The International Food Policy Research Institute (IFPRI) had recently published a forecast that grain prices were set to turn the corner and rise in real terms over the coming decade.

Given what had occurred historically, this was a pretty remarkable prediction. For example, the figure below shows the history of real wheat prices in England since 1300 — they’ve been falling steadily for 200 years. 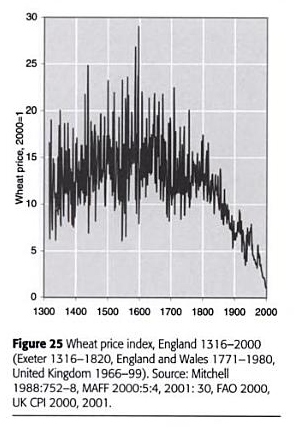 The wheat price forecaster at the Western Australian Department of Agriculture was persuaded by the IFPRI analysis, and was providing us with bullish predictions to use in our modelling. I was very sceptical, and offered to bet him $100 that “The real price of wheat will be lower on December the 1st 2005 than it was on December the 1st 1995”. The price was to be for US winter wheat, using the Australian CPI as a deflator.

This proposed bet was actually favourable to him, since his forecast was for real prices to be quite a bit higher in 2005. If he believed his own prediction, the bet was far from being a 50:50 proposition. When he hesitated, I made the terms even more favourable to him by offering that the the payoff would be the price of one tonne of wheat in December 2005. If he won, the payoff would be higher than if I won, potentially much higher.

I got a good feel for how confident he was in his predictions when he refused to take even this highly skewed bet. I was pretty frustrated, especially since we had to keep using his price forecasts in the modelling! (It wasn’t our choice — our client, the Department of Agriculture, specified the numbers to use.)

If I had specified a different time span for the bet, would I have won? Almost certainly. Figure 2 shows that only for a brief period in early 1996 and for 12 months over 2007-08 (the “global food crisis”) have subsequent real prices exceeded those in December 1995. I would have been really unlucky to lose, and if I had lost it certainly would not have been because food prices had reached a turning point and risen steadily. It would have just been the coincidental timing of a spike in prices. 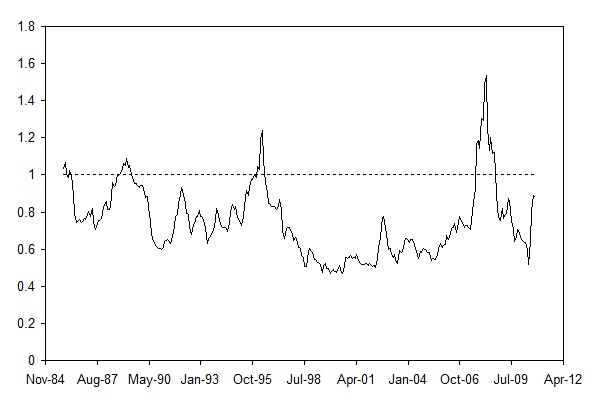 In December 1995 I had a big advantage; I knew that prices were at a high compared to recent history, so there was a good chance that future prices would be lower, maybe even if the trend line was actually upwards. What if I had made the same bet (over 10 years) starting at different points in time?

Figure 3 shows the ratio of real wheat price 10 years later to contemporary wheat price. At times when this ratio is below 1.0, I would have won the bet. It turns out that, even without the advantage of starting from a high price, I would have won almost 70% of the time for this period. The impact of the 2007-08 price spike is obvious in the results for 1997-98, but the ratio stays above 1.0 after that, not because prices were high in 2009-10 (they weren’t), but because prices plummeted after mid 1996 and were very low from 1997 to 2002. So much for steadily rising prices! 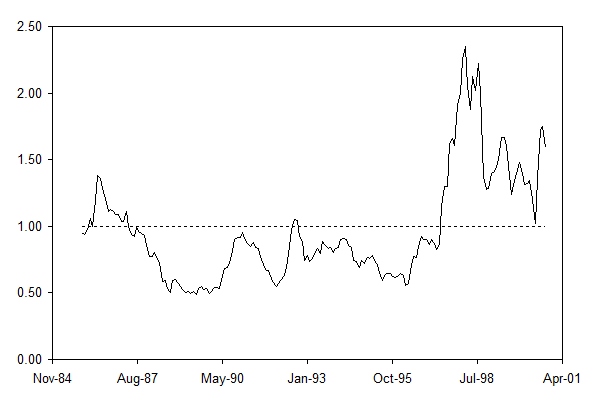 A key lesson from this is not to get carried away by high commodity prices. In 2007, just like in 1995, people started predicting that it was the start of an era of continuing high food prices. However, economics says that the best cure for high prices is high prices. People respond to high prices in all sorts of helpful ways so that an acute mismatch of supply and demand is rapidly overcome, and prices fall. Even if people don’t understand economics, they too easily forget history, which says exactly the same thing.

Would I propose the same bet again? During a price spike, absolutely! Otherwise, probably not. Given that the world seems to be under-investing in agricultural research, and that China and India are developing rapidly, I would not expect a falling trend for real grain prices over the next decade.

One way it might fall is if governments in major countries reform their biofuel policies. Currently these are contributing to higher food prices by increasing the demand for certain grains. In some cases they are reducing supply by diverting land from food production to non-grain biofuel feedstocks. They are controversial and very inefficient policies in terms of mitigating climate change, so perhaps governments will decide to abandon them at some point.