212 – Wildlife corridors: the next big thing?

There seems to be a lot of interest in wildlife corridors as a strategy for nature conservation at the moment. The push is for very large corridors, hundreds of km long in some cases. Reflecting this interest, the Australian Government put together a committee that has developed a ‘Draft National Wildlife Corridors Plan’. Having read the Plan, I can see that the corridors idea has appeal, but I think there is a need for caution when the Government decides how enthusiastically to embrace it.

Why are corridors good? According to the draft Plan, because ‘in order to rebuild connected, functioning landscapes and maximise the benefits provided by the system of protected areas, it is necessary to strategically link protected areas with areas of remnant habitat and ecological value across all lands’. It is claimed that ‘wildlife corridors are one of the most effective conservation tools available for protecting biodiversity and preparing landscapes for climate change.’ Some species might be able to move along corridors as climate changes, so that they can remain in enviroments that suit them. Also, ‘naturally connected landscapes and ecosystems are generally healthier and can store carbon more effectively than degraded landscapes.’ 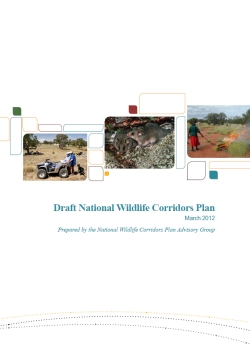 Despite these claims, and other similar ones in the document, I found the case for corridors made in the Plan to be underwhelming. The claimed benefits seem rather rhetorical and non-specific. I would have liked to get clearer and more specific information about the environmental benefits of corridors. It’s about ‘connectivity’, which ‘is a fundamental requirement of healthy, productive landscapes’, apparently, but what, specifically, does connectivity help with? Which types of flora and fauna, or which types of ecosystems, are expected to do better if we invest in corridors? How much better would they do? Are these organisms and ecosystems particularly important, compared to others? If resources are concentrated in a large corridor project, is the whole really better than the sum of the parts? What is the evidence?

The absence of this sort of information from the Plan is liable to make one wonder if the information is actually available.

It appears that ecologists are not uniformly enthusiastic about the corridors idea. Decision Point, the magazine on research about environmental decision making, has presented a range of views on the subject. Hugh Possingham (in DP#26) seems to be an agnostic, suggesting that we don’t yet have the evidence that spatially connected investments deliver a greater outcome than those investments in isolation, but arguing that it’s worth testing.

On the other hand, Carina Wyborn (in DP#58) argues that, even if ‘connectivity provides an uncertain metric for effective conservation’, the corridors idea is worthwhile because it inspires and motivates people to get involved.

Suppose it’s true that a whole corridor is better than the sum of its parts, and that the intuitive appeal of the corridor concept helps to bring more landholders and other stakeholders on side. Are these things sufficient to be able to say that corridors should be a high priority for public investment in the environment?

They help, obviously, but they are not sufficient without a broader assessment of the issues. As argued by Hodgeson and colleagues, investment in a corridor would need to be weighed up against investment in the best alternative approach that could be purchased with the same resources. 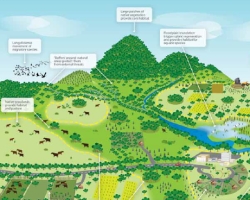 The fact that corridors are large, operating at the ‘landscape scale’, is put forward as one of their advantages.

That’s fair enough, but there are also disadvantages from concentrating a lot of conservation eggs into one large basket in this way.

The most important disadvantage, in my judgement, is that by concentrating resources into a particular corridor project, there may be an increased risk of spending a share of the money on changes that provide relatively low environmental benefits. Areas may get resources because they are in the right place to connect to the corridor, rather than because they help address an important and tractable environmental problem.

On the other hand, if we are spending money on many well-chosen smaller projects, we are able to cherry pick projects that will generate the greatest conservation benefits per dollar, and they may or may not be projects that do most to enhance connectivity. (The ‘well-chosen’ is important. It implies a significant effort to analyse project benefits and costs and select the best ones – a greater effort than we commonly see in Australian Government programs.)

I am not arguing that corridors are bad. I am arguing that their benefits need to be big enough to outweigh the alternatives. Whether the benefits are big enough is not self-evident, and there are reasons to suspect that they might not be, so careful assessment (and perhaps further research) is needed before we should spend a lot of public money on them.