237 – Ranking environmental projects 3: With vs without

Episode 3 in this series on principles to follow when ranking environmental projects. This one discusses the “with versus without” principle for estimating the project benefits.

Through the series, we will cover a number of points about the estimation of benefits from an environmental project. Initially, to keep things simple, I’ll talk about the case where there is a single type of benefit being generated by an environmental project (e.g. a threatened species is being made safer). In later posts I’ll talk about cases with multiple types of benefits from the same project. 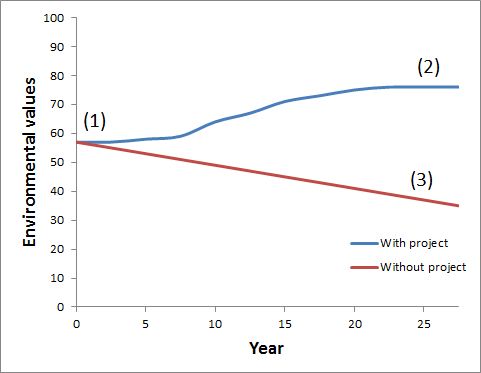 Clearly, in this example, the benefits of the project grow over time (the two lines diverge in Figure 1). Ideally, we would estimate the benefits in each year after the project is implemented and add them up (after allowing for discounting, which we’ll cover in a later post). A practical simplification is to estimate the environmental benefits based on the difference in the asset value with and without the project in a particular future year. For example, we might choose to focus on 25 years in the future, and estimate values at that date with and without the project. In doing this, we need to be careful that we deal appropriately with time (see a later post for details). 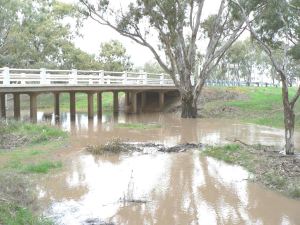 Assuming we go with that simplified approach (focusing on benefits at year 25), the relevant measure of project benefits for ranking projects is (2) minus (3). I have seen ranking systems which use (1) minus (3), (2) minus (1), (1) alone or (2) alone, and sometimes more than one of these in the same ranking system, but they are all irrelevant. If you include (2) minus (3) you should not include any of the others listed. To do so will just make the rankings worse. 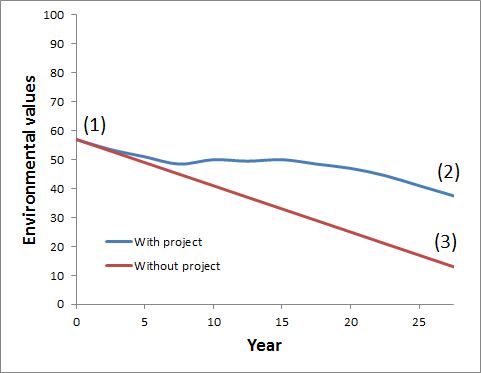 On the other hand, a project that superficially appears to generate large benefits may actually not do so, because those benefits would have been generated even without the project. In other words, the benefits are not ‘additional’ to what would have happened anyway. The without-project line in the graph would be almost as high as the with-project line, so the difference between them (= the benefit of the project) would be minimal (Figure 3). 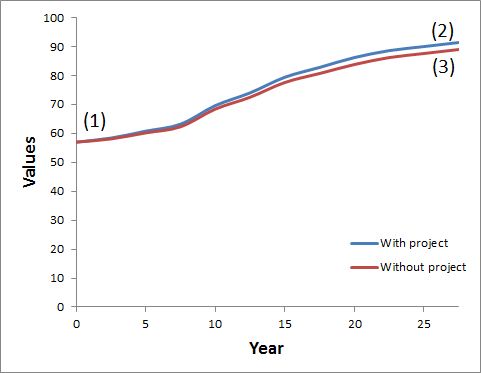 For example, suppose that a proposed project encourages farmers to adopt a new type of environmentally beneficial crop, where that crop is much more profitable than farmers’ existing crops. If the private benefits are large enough, it’s a safe bet that the farmers would have adopted the new crop even without the project. It would have been promoted by word of mouth and by private farm business consultants. Adoption of the crop for commercial reasons would have generated environmental benefits as a spin-off.

Making good predictions about the “without project” scenario can be quite difficult, requiring good knowledge of the environment, the relevant management practices and the people whose behaviour matters. Weak thinking about the “without” scenario for environmental projects is a common failing, sometimes leading to exaggerated estimates of the benefits.

2 thoughts on “237 – Ranking environmental projects 3: With vs without”