As the developer of various decision tools, I’ve lost track of the number of times I’ve heard somebody say, in a grave, authoritative tone, “a model is only as good as the information you feed into it”. Or, more pithily, “garbage in, garbage out”. It’s a truism, of course, but the implications for decision makers may not be quite what you think.

But what should we conclude from that? Does it mean, for example, that if you have poor quality input information you may just as well make decisions in a very simple ad hoc way and not worry about weighing up the decision options in a systematic way? (In other words, is it not worth using a decision tool?) And does it mean that it is more important to put effort into collecting better input data rather than improving the decision process?

No, these things do not follow from having poor input data. Here’s why.

Imagine a manager looking at 100 projects and trying to choose which 10 projects to give money to. Let’s compare a situation where input data quality is excellent with one where it is poor. 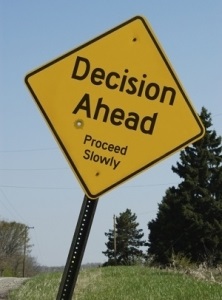 From simulating hundreds of thousands of decisions like this, I’ve found that systematic decision processes that are consistent with best-practice principles for decision making (see Pannell 2013) do a reasonable job of selecting the best projects even when there are random errors introduced to the input data. On the other hand, simple ad hoc decision processes that ignore the principles often result in very poor decisions, whether the input data is good, bad or indifferent.

Not every decision made using a sound decision process is correct, but overall, on average, they are markedly better than quick-and-dirty decisions. So “garbage in, garbage out” is misleading. If you look across a large number of decisions (which is what you should do), then a better description for a good decision tool could be “garbage in, not-too-bad out”. On the other hand, the most apt description for a poor decision process could be “treasure or garbage in, garbage out”.

An interesting question is, if you are using a good process, why don’t random errors in the input data make a bigger difference to the outcomes of the decisions? Here are some reasons.

Firstly, poorer quality input data only matters if it results in different decisions being made, such as a different set of 10 projects being selected. In practice, over a large number of decisions, the differences caused by input data uncertainty are not as large as you might expect. For example, in the project-selection problem, there are several reasons why data uncertainty may have only a modest impact on which projects are selected:

So input data uncertainty means that some projects that should be selected miss out, but many good projects continue to be selected.

Even where there is a change in project selection, some of the projects that come in are only slightly less beneficial than the ones that go out. Not all, but some.

Putting all that together, inaccuracy in input data only changes the selection of projects for those projects that: happen to have the most highly inaccurate input data; are not favoured by the data inaccuracies; are not amongst the most outstanding projects anyway; and do not have multiple errors that cancel out. Further, the changes in project selection that do occur only matter for the subset of incoming projects that are much worse than the projects they displace. Many of the projects that are mistakenly selected due to poor input data are not all that much worse than the projects they displace. So input data uncertainty is often not such a serious problem for decision making as you might think. As long as the numbers we use are more-or-less reasonable, results from decision making can be pretty good.

To me, the most surprising outcome from my analysis of these issues was the answer to the second question: is it more important to put effort into collecting better input data rather than improving the decision process?

As I noted earlier, the answer seems to be “no”. For the project choice problem I described earlier, the “no” is a very strong one. In fact, I found that if you start with a poor quality decision process, inconsistent with the principles I’ve outlined in Pannell (2013), there is almost no benefit to be gained by improving the quality of input data. I’m sure there are many scientists who would feel extremely uncomfortable with that result, but it does make intuitive sense when you think about it. If a decision process is so poor that its results are only slightly related to the best possible decisions, then of course better information won’t help much.