The news of Bjorn Lomborg establishing the “Australian Consensus Centre” at the University of Western Australia has generated plenty of media attention and much discussion within the University.

There has also been commentary on the fact that the Australian Government could find $4 million for this initiative at a time when government funding in general (and university funding in particular) is under such great pressure.

I had no idea that the UWA arrangement was in prospect until Lomborg dropped in to meet me briefly the day before it was announced a couple of weeks ago. I had not had any contact with him in the past. I found him to be very personable and he asked sensible and genuine questions about environmental issues in Australia.

I have been aware of Lomborg’s work since his 2001 book The Skeptical Environmentalist (TSE), with its message that many environmental problems are not as bad as we’d been led to believe, and some are getting better. I’ve also been interested in his writings on climate policy, and his more-recent initiative, the Copenhagen Consensus, which sets out to prioritise a set of major international policies. The latter will be adapted for a new set of policies in the UWA initiative. 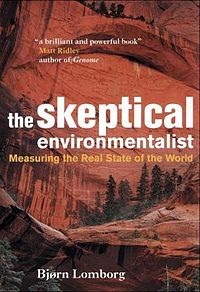 All three of these areas of work have generated controversy and criticism. I’ve read many of the critics, particularly in the early days of TSE when the criticism was raging.

I split the criticisms into two types: identification of errors of fact and criticisms of what he does with the facts (interpretations and judgements). There were some errors of fact in TSE, but not as many as claimed. In my judgement, many of the claimed errors were misinterpretations, misunderstandings or misrepresentations by the critics, quoting him out of context, highlighting trivial issues, and so on. People who didn’t like his conclusions went out of their way to find the smallest hint of an error and blow it up. There is a web site called Lomborg Errors, which includes numerous so-called errors from TSE, but when I read it I was singularly unconvinced by many of them. In fact I found myself laughing out loud at some of them. Given the huge scope of the book, the number of significant, genuine errors is remarkable small, really, and they don’t change the general message of the book. But the myth of there being numerous serious errors got well established, and is accepted as received wisdom by many.

I didn’t agree with everything in TSE. Some parts were less convincing, and it seemed too optimistic to me in some respects. These were generally not errors of fact, but differences in judgement about what they implied or what should be done about them.

Lomborg has faced plenty of disagreement about his policy recommendations, particularly in relation to climate change. He argues that the political barriers to pricing carbon at a price level that will achieve the desired outcomes are so great that we may as well not bother with it. Instead he advocates a large public investment in development of new technologies, such as for renewable energy. This position is obviously at odds with most people who are concerned about climate change, but my own view is that his pessimism about the politics is justified (reinforced by the messages coming out of India recently) and that the technology route is likely to be the only approach with any real chance of averting serious climate change. I’ve written about this here.  Interestingly, his position is not that of a climate sceptic/denier, although he is sometimes characterised as being one.

Looking around the web, I see some scientists arguing that climate change will be greater and more costly than Lomborg has concluded in his climate book, often coupled with attribution of dubious motivations and associations. Perhaps he has made errors here and underplayed some potential outcomes – I haven’t taken the time to evaluate the claims. Nevertheless, even if he has, it doesn’t affect the logic behind his recommended policy approach.

The Copenhagen Consensus work, a version of which he will bring to UWA, is somewhat different in nature. His contribution is to set up and manage the process, bring people together and publicise the results. The judgements made in the process are not his judgements, but those of panels of people (usually senior economists) responding to evidence and cases put by commissioned experts. The focus is on identifying priorities for policy action. From a set of defined policies, which are the ones that are likely to have the greatest benefits for mankind? The explicit focus on prioritisation is critical, but is often missed by people advocating for a particular policy.

The controversy here arises because carbon-pricing policies consistently come out as being much lower in priority than other things like improving childhood nutrition in developing countries and fighting infectious diseases. In my view, this result isn’t a surprise, considering the likely benefits, feasibility, time lags and costs of the options. But it adds to the impression that Lomborg is a climate “contrarian”, even though the results are not actually generated by him.

Some have argued that the concept of prioritising these policies is wrong – we should just implement them all. I think that’s very naïve. It’s not how the world works. None of the policies being evaluated is currently in place. It’s a huge, difficult, risky task to try to get a major new policy adopted, especially when international agreements are needed. Governments have to carefully prioritise how to spend their financial resources and their political capital.

It’s very interesting that Vice Chancellor Paul Johnson has signed up to the University hosting this new centre. He must have anticipated that there would be controversy. I think it’s positive that the University hasn’t been scared off. A university is a good place to do work that challenges people to think differently.

Overall, if it can sufficiently avoid the taint of politics (which might be tricky), I think the initiative could make a worthwhile and interesting contribution to the policy debate in Australia. But also there will no doubt be aspersions cast against Lomborg and UWA.