All the world has seen media coverage of the extraordinary fires that Australia has endured this summer. They sparked an intense discussion and debate about what Australia should do to reduce bushfire risks going forward. What does our economic modelling of fire management say about that?

I had a direct stake in the fires. We have a small cabin in a coastal town an hour north of Perth, and before Christmas we had about a week of temperatures above 40°C (104°F), and a big fire threatened the town. It got to the point where they evacuated everybody, but thankfully the weather improved just enough and just in time for the firefighters to get it under control.

Over the past 8 years, I’ve been involved in a number of projects looking at the economics of bushfire risk mitigation in different contexts. We’ve done case studies in four Australian states (Western Australia, South Australia, Victoria, New South Wales) and in New Zealand.

The different studies analysed different combinations of fire management options. The one common element in all the studies was prescribed burning to reduce fuel loads, but in particular cases we also looked at land-use planning to exclude assets from high-risk areas, retrofitting of houses to make them more fire-resistant, fire breaks, and community education.

It was a mix of research and consulting projects, and some of it still needs to be published. 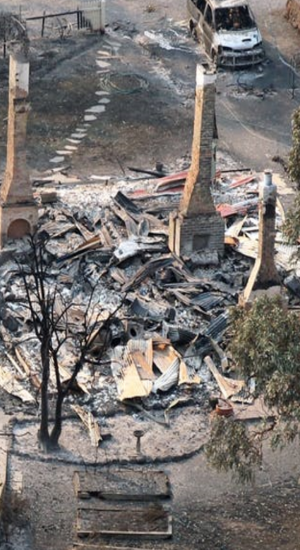 We found that the economics of bushfires are really complex and data-intensive, and often there is a lack of data to do a bullet-proof analysis. In some cases, we met some of the data needs using sophisticated fire simulation models, but in others, we relied on data synthesis and expert judgments.  Despite the variations in context and methods, we did learn some pretty clear lessons across the various analyses.

In the analysis we did for the Perth Hills, we found that strong land-use planning was the most cost-effective strategy. While it is easy to see the sense in that, it comes up against the reality that some people especially like to live in locations where the fire risk is especially high. We didn’t factor in the likely transaction costs to government in trying to impose a policy that a group of people is opposed to.

Another interesting finding was that a broad policy of retrofitting houses to reduce their likelihood of burning was not economically efficient. Such a policy imposes substantial costs on a large number of houses to avoid the loss of a much smaller number of houses, and we found that the numbers just don’t stack up. Interestingly, new houses in bushfire-prone areas of Western Australia are now required to meet high standards of fire resistance.

From a bushfire perspective, Australia would have a lot to gain from effective international action to mitigate climate change. This suggests that we should be playing a stronger role in the global climate policy process.