337. Developing-country farmers: how are they different?

One of the papers in the recent AEPP Special Issue of papers on adoption of agricultural innovations is about how smallholder farmers in developing countries differ from larger and wealthier farmers, and how these differences affect the farmers’ responses to new agricultural practices and technologies.

The paper is by Rick Llewelly from CSIRO in Australia and Brendan Brown from CIMMYT in Mexico, who have worked together on this issue for a number of years. You can hear my interview with Rick about the paper here. My conversation with Rick is available as an episode of the AEPP podcast series. 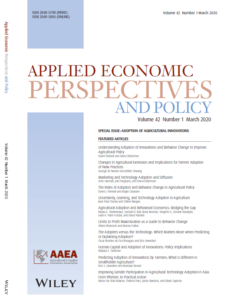 Here are a few of the differences that Rick and Brendan identify and discuss in their paper. The discussion is in the context of predicting adoption of a practice that is currently relatively new to farmers.

“In developing country settings there is greater potential for extreme differences between farms in scale, wealth, and resources, including the influence of tenure status.” In some cases, larger farmers are more able and more motivated to adopt a beneficial technology, while smaller farmers can tend to be left behind.

There is plenty of evidence that poorer farmers in developing countries tend to have higher discount rates, meaning that they give more weight to benefits in the short term than in the long term. This could be because of the high interest rates they have to incur when they borrow money, or because their poverty means that generating income in the short term has to take priority, even if it means missing out on large benefits in the long term. This is particularly a barrier to adoption of new practices if those practices involve relatively large up-front costs or the benefits take some years to be delivered.

Inability to capture the benefits

“In some cases, farmers may expect that future benefits from investments in an innovation will mostly accrue to the land owner rather than to themselves.”

Cultural norms may conflict with the use of particular practices. For example, retention in the field of crop residues following harvest can be beneficial for later crops grown in that field, but in many parts of sub-Saharan Africa, “all land tends to be considered as communal grazing land in the noncropping seasons”. So if you are a crop farmer in one of these areas, it is not socially acceptable to stop other people’s livestock from grazing on your crop residues and destroying the benefit of having retained the residues. For more on this, see my paper Pannell et al. (2014), which is summarised in PD268.

Objectives other than profit

Some farmers rely strongly on their own production of food for their own family. “The need to account for farmers’ subsistence needs can add complexity to predicting adoption of new practices, particularly where subsistence farmers are also sometimes engaged in market-directed production”.

Relative to larger, wealthier farmers in developed countries, smallholder farmers are likely to be more risk-averse, so less inclined to adopt practices that are highly beneficial on average but relatively variable from year to year.

Smallholder farmers may give less consideration to generation of public environmental benefits than at least some farmers in developed countries do, and this too would influence which practices they are willing to adopt.

Factors related to learning about a new practice

In some cases, communication between developing-country farmers in different regions or different ethnic groups is less than we typically see within a more homogeneous population of farmers in a developed country. This can slow down the spread of beneficial new practices through the farming community.

There may be a lack of education needed to understand a particular practice, or a lack of required skills and knowledge, compounded by the poor quality of advisory support in some developing countries.

Clearly, there are a number of factors that can combine to make the adoption of new farming practices in developing countries unfold in rather different ways than we typically observe in developed countries. Scientists, extension agents and agricultural policy makers need to account for these factors when making judgements about what impact a research project, an extension campaign or a policy could have.

Llewellyn, R. and B. Brown. 2020. Predicting adoption of innovations by farmers: how is it different in smallholder agriculture? Applied Economic Perspectives and Policy 42(1), 100-112.