16 – The election and the environment

Last week I attended the National Landcare Awards in Canberra. A highlight of the night was hearing the MC, Julie McCrossen from ABC Radio National, repeatedly refer to the Minister for Agriculture, Fisheries and Forestry, Warren Truss, as “my beautiful assistant”. The lovely Warren was actually a stand-in for the Prime Minister, who made a last-minute decision that the Landcare Awards were less important than meeting the triumphant Australian Olympic team arriving back in Sydney. This decision was not unrelated to the fact that it was the first week of the national election campaign. [p.s. 09/09/04 I shouldn’t be put out. This week the Prime Minister didn’t even attend “the Prime Minister’s Science Awards”.] Currently it looks like the vote will be close, so there is a high and ever-present risk that one side or the other will come up with ill-considered, poorly designed and inefficient policies (to complement the existing set) in their desperation to attract voters.

So far the environment has featured higher than usual in the election debate. It started when Peter Garrett, former singer for the band Midnight Oil, joined the Australian Labor Party in a blaze of publicity some months ago. He has been a prominent advocate for environmental issues and presumably the aim was that he would attract voters with environmental concerns to the Labor Party. Surprisingly he has since been almost invisible in the national media. I don’t recall seeing a single article or interview featuring him. Perhaps the party is still learning to trust him. [p.s. 09/09/04 I saw him give a long interview on a panel show on television last night.]

In the first week of the campaign, the environment featured in the form of talk about protection of old-growth forests in Tasmania from logging. It’s a very narrow version of “the environment”, but at this stage it looks like all we are going to get in the way of new environmental policies or positions. (I don’t think the Prime Minister’s comments qualify as a “policy” yet, more like an expression of interest.) [p.s. 09/09/04 The Labor party has since pledged to sign on to the Kyoto Protocol.]

In the last couple of days the government has been attacking the Greens (the political party) quite virulently, a sure sign that the Greens are doing well in the polls. Yesterday the deputy Prime Minister told us that the Greens were effectively a bunch of communist sympathisers. Talk about playing the man rather than the ball. What specifically is wrong with their policies, Mr Anderson?

That seems to be about it so far. But we’ll see politicians at every possible public event over the next month, including events with an environmental flavour. Apart from Warren Truss, there were several at the Landcare awards, including leader of the Greens, Bob Brown. The awards had an undercurrent of self promotion and self justification of the Landcare program. I don’t think that was election related, but the style of getting the maximum possible mileage out of some dodgy “facts” and figures would have been very familiar to politicians.

As the nominees for each award were announced by Julie McCrossen, photos of them were projected onto huge screens. For my nomination for the Landcare Research award, I had provided an ironic photo of me pouring salt onto a plant. 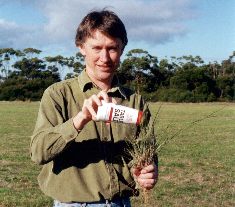 Julie commented lightly to the audience that this seemed to be “not the idea”. I didn’t win the award, but I decided to reply to Julie’s comment through the medium of a limerick, since she was running a limerick competition through the evening. She liked it, and it was one of the few she read out to the assembled dignitaries and big wigs. Here it is.

Julie thought I was playing a trick

Pouring salt on a plant in the pic

But my case I will plead

For the plant was a weed

So I’m not such a terrible dick