A big part of my job as an academic is reading unpolished writing of other people: research students’ theses, colleagues’ draft research papers, journal papers I am asked to review, draft funding proposals, and so on. Of the many writing mistakes that I see, one of the most common, even amongst people who otherwise write well, is mis-use of the word however. It’s not at all difficult to get it right, but it’s remarkable how many people don’t.

The key point is that you should not use however to combine two contrasting sentences into one sentence. If you want to do that, use but. Or else keep using However but punctuate for two sentences.

Wrong: I don’t know why so many people get this wrong, however, I know from experience that they do.

Correct: I don’t know why so many people get this wrong but I know from experience that they do.

Correct: I don’t know why so many people get this wrong. However, I know from experience that they do.

An acceptable alternative version of the last example is to use a semicolon in place of the full stop: ‘… get this wrong; however, …’. Used in this way, the semicolon is a lot like a full stop but it emphasises that the two sentences are related (as they always are when you use however in this way). 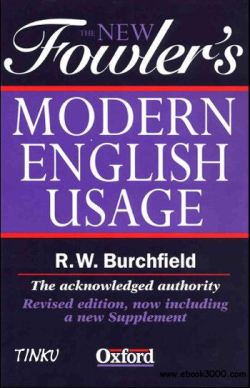 On occasions, I’ve had trouble convincing people about all this. These are often people who write quite well, but have somehow fallen into misusing however and have been doing it for years without being pulled up for it.

In such cases, I pull out the big guns: “Fowler’s Modern English Usage”, the world’s ‘acknowledged authority’ on usage, as they say themselves on the cover! Here’s what they say:

“Avoid at all cost the illiteracy of using however as a simple substitute for but, or of allowing a sentence to run on when However should have had a capital H at the start of a new sentence.”

Just to confuse matters, there is a way in which it is possible to use however in the middle of a sentence without upsetting me (or Fowler). The usage that’s acceptable is to move However from the start of a sentence to the middle:

Correct: I don’t know why so many people get this wrong. I know from experience, however, that they do.

Notice that the however is not linking together what could otherwise be two separate sentences. If you take the however out of the second sentence, it doesn’t become two sentences. But that is what happens if you delete however from the Wrong example above.