Whatever work or hobbies we do, there are regularly new practices coming along that we are encouraged to adopt: new technologies (e.g. a new iPhone, an auto-steer crop harvester), or different behaviours (e.g. reducing our usage of energy or water, changing the allocation of land to different crops).

The agricultural examples above reflect that some of my research is on adoption of new practices by farmers, but the issue I’m talking about today is relevant in all spheres where people adopt new practices.

It is well recognised that people vary in the personal goals that drive their choices about whether to adopt new practices that are promoted to them. Amongst commercial farmers, for example, there are differences in the emphases they give to profit, risk and environmental outcomes.

Any attempt to understand or model adoption of new practices needs to recognise the potential importance of these different goals. Many studies do include variables representing these three goals, and sometimes others.

However, it is less often recognised that there are two aspects to each of these goals when looking at a new practice:

These two aspects are closely linked. They interact to determine how attractive a new practice is, but they are distinctly different. One is not a proxy for the other. 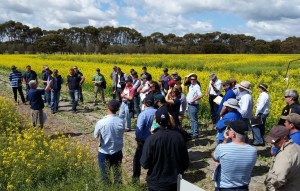 For example, suppose a farmer is considering two potential new practices for weed control. The farmer judges that new practice A is much riskier (less reliable) than new practice B.

How much will this affect the farmer’s decision making? That depends on the farmer’s attitude to risk. For a farmer who has a strong aversion to risk, practice B will be strongly favoured, at least from the risk perspective. (Other goals will probably also come into play as well.) For a farmer who doesn’t care about risk one way or the other, the difference in riskiness between practices A and B is of no consequence. Some farmers (a minority) have been found to be risk-seeking, so they would prefer practice A.

It doesn’t help that the issue is not recognised in common conceptual frameworks used by social scientists studying adoption behaviour, such as the Theory of Reasoned Action (Fishbein and Ajzen 1975) and the Theory of Planned Behaviour (Ajzen 1991).

It should be recognised in a sound economics framework (e.g. Abadi Ghadim and Pannell 1999 do so for risk), but it often isn’t included in the actual numerical model that is estimated.

The only framework I’ve seen that really captures this issue properly is our framework for ADOPT – the Adoption and Diffusion Outcome Prediction Tool. Hopefully this insight can diffuse to other researchers over time.

Fishbein, M. and Ajzen, I. (1975). Belief, Attitude, Intention and Behavior: An Introduction to Theory and Research. Reading, MA: Addison-Wesley.