372. The fairness of additionality rules

At a national soils workshop on 5 May 2022, two speakers commented on the additionality rule for soil carbon offsets, saying that the rule is unfair and causes concerns amongst some farmers. How unfair is it really?

Under the Emissions Reduction Fund in Australia, farmers can get paid for sequestering carbon in their soil. 13 ways of sequestering soil carbon are recognised in the policy, including: switching from cropping to permanent pasture, changing grazing management to promote soil vegetation cover, retaining stubble after a crop is harvested, and converting from intensive tillage to no-till.

The idea underpinning this policy is that paying farmers will incentivise them to adopt these practices that sequester carbon in the soil, contributing to a reduction in climate change.

Additionality refers to whether a payment results in additional actions that would not have occurred without the payment. In the figure below, the first bar shows a situation where the farmer’s private benefits from adopting a sequestering practice are not large enough to exceed their private costs of adopting it so no adoption occurs, but with an offset payment, the overall private benefits are large enough to outweigh the private costs (the second bar), so the farmer adopts the practice. 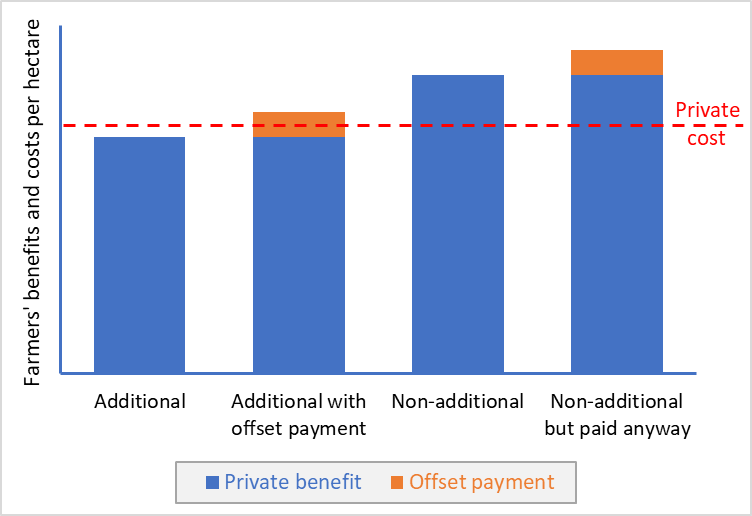 Non-additionality means that the farmer would have done the action even if they were not paid because the private benefits exceed the private costs (the third and fourth bars in the figure). In that situation, a payment does not cause any additional action and so does not contribute to addressing climate change. Logically, if we seek to make the biggest possible difference to climate change for any given cost, we should avoid making offset payments for non-additional actions.

This particularly matters because some of the allowable ways of sequestering soil carbon are non-additional for most farmers. Almost all crop farmers use no-tillage methods these days, so paying all farmers who use no-till would result in a big cost to society but make almost no difference to climate change. It would use up resources that could be used in other ways to make a bigger difference to climate change.

In that light, would it be fair for all farmers who use no-till to receive offset payments irrespective of additionality? I expect it would not seem fair to the general public who probably have expectations that a climate-change policy should address climate change.

However, fairness is in the eye of the beholder. In Australia’s soil carbon policy, any farmer who is already using a particular sequestration action is deemed to be non-additional for that action. Applying this additionality rule means that some farmers will receive money for doing a particular action (the ones who start using it after they sign up for offset payments) but others will not (the ones who were already using it before the policy started). Is that fair? From the perspective of the farmers who are not receiving payments, perhaps not. Some farmers who adopted the practices early see themselves as being disadvantaged as a result of having been more socially responsible. They have done the right thing voluntarily, but others who have dragged their feet are the ones getting paid.

But even in this scenario, the fairness question is not straightforward. The farmers who have adopted the soil-sequestering practices have probably done so because they believed that there were benefits to themselves in terms of farm productivity (bar 3 in the graph). Listening to people who are enthusiastic about soil carbon, they usually emphasise that the private benefits are large. But people and farms are heterogeneous and any given action would not produce benefits in excess of costs for everybody. The people who have not adopted may have made a judgment that the benefits to them are less than the costs (bar 1). 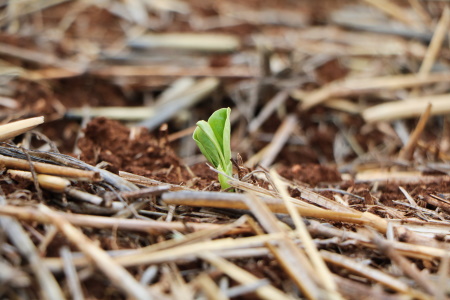 Viewed in that light, why should it be considered unfair to pay the non-adopters enough to make the practice attractive enough to adopt? If the payments are not excessive, the recipient farmers would not be made better off than the unpaid existing adopters because the existing adopters already get a private net benefit from adopting, whereas the non-adopters expect to make a net cost from adopting. The payments to non-adopters are just making up the shortfall in benefits to make adoption worthwhile. The payments don’t generate big profits – they are covering other costs plus a small profit margin (bar 2). For existing adopters, any payments they receive are all cream on top of the cake because they already make positive net benefits from adopting (bar 4).

Whether offset payments to farmers are fair when comparing farmers depends in part on how well additionality is assessed in the policy. If the assessment of additionality is weak and allows payments to some farmers who would have adopted anyway, there is a legitimate fairness issue because some non-additional farmers are getting paid (bar 4) and some aren’t (bar 3). Australia’s policy approach of judging additionality solely on whether farmers are already doing the practice means that we will inevitably end up paying some non-additional farmers; specifically, farmers who have not adopted the practice yet but would have done so in future even without an offset payment.

Weighing all that up, there are a few potential ways forward.

On the other hand, there are many other problems with soil carbon offsets (see PD 371) and some them are more serious than the fairness issues. For those other reasons, the best option, in my view, is the last one. If we removed soil carbon from the Emissions Reduction Fund, we could reallocate the resources onto other ways of combating climate change that would make a far bigger difference.

Webinar: “Could soil carbon sequestration ever be a worthwhile climate policy?”

I presented the Environmental Policy Lecture supported by AARES, CEEP and CAED
Date: Friday 20 May 2022
Time: 11:00am – 12:00pm  AWST
To view a recording for the webinar, download the slides and read the Q&A session, go to Pannell Discussion 374.

4 thoughts on “372. The fairness of additionality rules”