In a new study, we estimate the Australian public’s willingness to pay for protection of a variety of threatened animal species. The journal paper is available here: https://www.sciencedirect.com/science/article/pii/S0301479722012324

For each species, we used two different survey-based techniques — contingent valuation and choice experiments — to elicit people’s willingness to pay for a change in threat status from almost certain extinction to a low extinction risk over 20 years. We had 2600 responses, of which 170 had to be discarded. Details of the methods used are in the paper.

In the contingent-valuation study, the median willingness to pay across all 12 species was $60 annually (95% confidence interval: $23 to $105). This value is broadly consistent with the results of a meta-analysis we did previously, looking at international and Australian studies (Subroy et al. 2019).

Depending on the statistical technique used, the annual willingness to pay for protection of different species ranged from $7 for the Boggomoss Snail to $129 for the Numbat. (See Table 2 from the paper, reproduced below.) These sorts of values can vary across species for all sorts of reasons, including whether the species is seen as charismatic or iconic (the numbat is the state animal emblem of Western Australia), its attractiveness, its familiarity, and the type of animal it is. 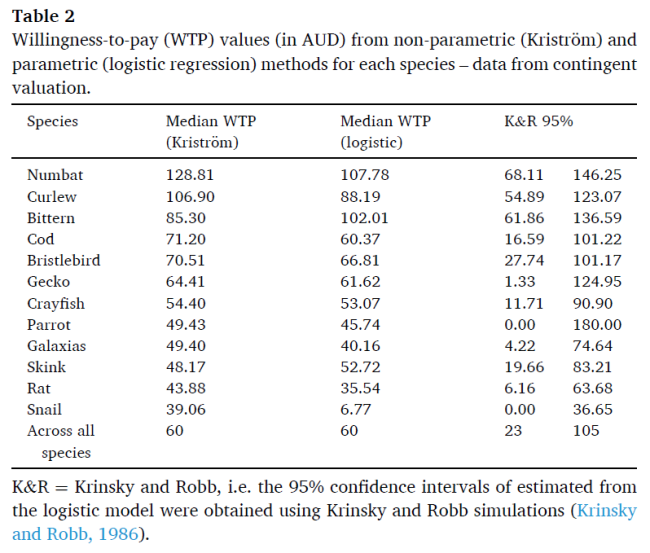 In the choice experiment, across the full suite of species, 75% of respondents were willing to pay for a conservation plan to prevent extinction. Even for species that might be expected to be held in relatively low esteem, such as a snail, a skink, a small fish and a rat, at least 69% of respondents supported conservation.

For most of the species, respondents’ willingness to pay was influenced by how threats were to be managed. Most people were positive about protecting animals in zoos and killing feral animals that eat or compete with the threatened species. The latter result was interesting given animal welfare concerns expressed by some in the public debate about that strategy. Support for strategies to reduce inbreeding was lower and more mixed. Of course, most respondents lack technical expertise about conservation strategies, so our results don’t provide a prescription for action, but they do usefully reflect how the community feels about these issues.

Interestingly, being explicit about the conservation methods, and allowing people to express their preferences about the options, seemed to result in people placing higher values on species.

To finish, here are a couple of quotes from our Conclusion.

“How extinction is prevented is much less important than that it is avoided but support was apparent for any of the approaches currently being taken to mitigate the impacts of feral animals, whether that be killing them, fencing them out or taking the threatened species into captivity. There was less  engagement with inbreeding reduction strategies, but there was also little evidence that any part of the sampled population actively rejected the approaches being taken.”

“While the amounts that people say they are willing to pay are hypothetical, and are unlikely to be matched in real life, they were still many times higher than required to conserve all of Australia’s threatened species.”