Increasingly, governments require developers to buy credits to offset any losses of biodiversity caused by their developments. In some cases, biodiversity offset credits  can be traded in specially created markets. As a result of trade in these credits, we end up with a price being attached to biodiversity. Does that mean that, in some sense, the price of a credit represents the value of biodiversity?

I was asked this question recently by a colleague who was interested in whether credit prices could be used this way in an analysis he was doing. It would be convenient if they could, because information about offset prices is readily available. In short, the answer is no. Here is why. I’m going to set aside the various challenges in making an offset market work and just assume that it does work well.

Biodiversity offset credits are generated by landholders who do some actions on their land that protect or enhance biodiversity. The actions have to be things that they would not do in a business-as-usual situation – they are doing them in response to the opportunity to earn extra income from selling the credits. The government evaluates the actions and issues an appropriate number of credits. Doing the actions means that the landholders bear additional costs relative to business as usual, so they need to be compensated (paid) to be willing to undertake the actions.

Biodiversity offset credits are bought by developers because it is beneficial for them to do so. They can get a financial benefit because buying the required number of credits allows them to proceed with their economic developments, which make them money.

The price of credits in the market is then determined by two factors: the cost of generating credits (the supply side of the credit market) and the benefits of using credits (the demand side of the market). Assuming that the market is operating reasonably well (there are plenty of buyers and sellers, and there is a good system for connecting buyers and sellers and completing trades), then the price will be approximately where marginal cost equals marginal benefit or, in other words, where supply equals demand. 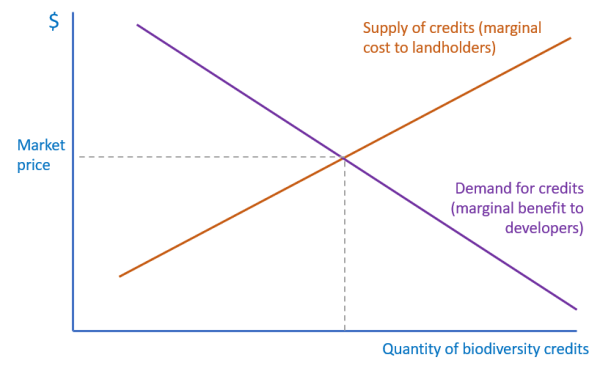 Note that the price is not determined by the value of biodiversity to the community (which I’ll take to be the community’s willingness to pay to protect or enhance biodiversity). The value to the community depends on how much people care about protecting or enhancing biodiversity. In a normal market, how much they care is reflected in their willingness to pay for the good in the market, and so the market price gives us some information about value. (Market price is not the full story, even in this case. I’ll come back to that.)

Even for a normal market good, the market price alone doesn’t tell us the value of the good, except for the marginal unit of the good – the last unit consumed. For all the other units consumed, the marginal value is higher than the market price. To get the value of all the consumed units of a good, we need to know the shape of the marginal benefits curve, which we can use to estimate the “consumer surplus”, which is the overall benefit of consuming that good.