Capitol had the right to release all of The Beatles music in the US, because Capitol was owned by The Beatles’ British label, EMI. But for ages they refused to release any Beatles music at all, turning down four singles and two albums, to the enormous frustration and anger of everyone associated with the band. Capitol arrogantly presumed that anything produced by the British would not succeed in the US. Even “She Loves You” (not just obviously a great track but the all-time highest selling record in the UK for the next 14 years) didn’t hit them as something that would be worth releasing. Clearly they were totally incompetent as judges of music, but they couldn’t even take the signals from the Beatles’ extraordinary success in England throughout 1963. American artists touring the UK were returning to the US with tales of the great music and unbelievable success of The Beatles, but Capitol didn’t know or didn’t care.

Eventually they released “I Want To Hold Your Hand” (one source says they were forced to by their parent company EMI) and immediately the Beatles records took off like nothing else before or since. In the opening four months of 1964, more than half of all records sold in the US were by the Beatles. One week they held all of the top five positions on the singles chart, plus the top two albums. Did Capitol learn from their previous arrogance and stupidity and treat The Beatles with more respect? Not a bit of it – they found a variety of ways to add insult to injury. 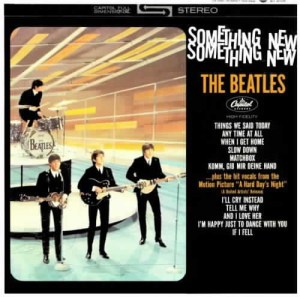 In a demonstration of brazen greed, Capitol omitted three or more songs from every Beatles album, and when they had accumulated enough songs in this way, they put out additional albums. This infuriated the Beatles, who were always concerned about providing value for money. They actually said in press conferences that their fans should write to Capitol and complain.

The average length of The Beatles’ early Capitol albums is about 26 minutes. Most outrageously, Something New included only five new songs; four of the other six had already been released the previous month on A Hard Day’s Night and two had already been released as singles. And they called it Something New! Even including the six songs that fans already had, the album was only 24 minutes long.

They didn’t just shorten the albums, they re-juggled and mashed together songs from different albums and singles, meaning that the albums lost continuity of sound and style. The Beatles hated this too and publicly complained about it. Capitol threw out any of the band’s judgments about album coherence and song sequencing. For American fans, the Beatles’ extraordinary album-by-album progression – so obvious in the rest of the world – was masked. Most of the US albums are incongruous messes, with songs stuck together from several different sources. For example, Yesterday and Today (which was at least honestly titled) included two tracks from Help! from mid 1965, four tracks from Rubber Soul from late 1965, two tracks from a late 1965 single, and three tracks from Revolver from mid 1966. When they released Rubber Soul, they didn’t just trim down the UK version, they slashed four tracks and threw in two tracks from Help! that didn’t belong there at all. All of their albums prior to Sgt Pepper were pruned, muddled and mangled like this.

United Artists got in on the rip-off act when they released the movie soundtrack albums for A Hard Day’s Night and Help! In the rest of the world these albums had 13 or 14 Beatles tracks, but in the US they had only 9 (AHDN) or 7 (H!). They were padded out with instrumental music from the soundtrack, not performed by The Beatles.

By this disgusting combination of practices, Capitol and UA required US fans to buy 12 albums (prior to Sgt Pepper) compared to 7 in the rest of the world.

Capitol butchered the sound of the recordings. Without permission from The Beatles or their producer George Martin, they added treble and extra echo to the early recordings and they manufactured fake stereo from mono recordings by putting high frequencies in one speaker and low frequencies in the other. As a result, the sound quality of the US releases was noticeably inferior to the UK originals.

Capitol was so careless about things that they actually failed to release two great Beatles songs on Capitol albums at all (“Misery” and “There’s a Place”). Rather than give US Beatles fans better value for money for a change, they just left them off The Early Beatles, presumably hoping to squeeze out one more album at some point, but there was never a suitable place to put them until Rarities in 1980. (The sleeve notes for Rarities trying to explain the omission of these tracks add dishonesty to the list of crimes. “In the early Sixties … [Beatles’] albums from one country seldom resembled those from another.” Absolute rubbish. Outside North America most releases in most countries matched the UK albums. Only in America did they mangle the albums.)

Another way that Capitol made easy money was by releasing extra singles for tracks that were only on albums or e.p.s in England. Some of these were good choices for singles (“Yesterday” and “Nowhere Man”) , but a couple of the songs were really second-rate by The Beatles’ standards (“I’ll Cry Instead” and “Matchbox”). Clearly, Capitol couldn’t tell good music from bad, or they didn’t care.

Up until Rubber Soul, the album artwork of US albums was just awful, as illustrated in the above two examples. They passed over some excellent artwork design on the UK albums to release a series of tacky and tasteless covers.

Overall, the contrast between the good taste, value for money and integrity of Parlophone/EMI in the UK, and the tastelessness, greed, incompetence and unscrupulousness of Capitol in the US could hardly be greater.

When the albums were released on CD in 1987, the Beatles insisted on the UK versions being used in all countries, and the appalling US albums were finally put to bed.

Or so it seemed. Unfortunately, Americans who grew up knowing only the mangled albums continue to hold a soft spot for them, despite their many failings. Eight of the albums were released in two box sets in 2004 and 2006, complete with the original poor sound. In January 2014, another CD box set of all 13 US-specific albums was released, and you can now buy them all individually. There is no excuse or explanation for this other than greed. This time they have better sound but the dreadful original track listings and covers are preserved. I pity the fans who are allowing themselves to be ripped off all over again. They should be giving Capitol their condemnation, not their money.

Lewisohn, M. (2013). Tune In, (The Beatles: All These Years, vol. 1), Crown Archetype, New York. [This is actually about the era that predates Capitol’s worst disgraces, but it’s easily the best of the many Beatles books on the market.]

34 thoughts on “264 – Capitol Records’ shameful handling of The Beatles”