After 2011, when Western Australia suffered 25% of all shark fatalities in the world (3 out of 12), it’s hard for a West Australian to imagine people paying for the pleasure of swimming with sharks. But large numbers do. I was part of a project to estimate the economic benefits of shark-based tourism to the small island state of Palau. It turns out that shark diving is really quite a significant part of the Palauan economy.

Palau is in the Pacific Ocean, about 800 km east of The Philippines. It has a population of about 21,000 people. Most of its economic activity relates to tourism, fishing or subsistence agriculture. In 2009, Palau announced a ban on fishing for sharks in its waters – the world’s first shark sanctuary. The motivation was to protect a growing tourism industry based on diving with sharks.

Some colleagues in the Oceans Institute at the University of Western Australia were keen to look at the economic benefits of shark diving at Palau, in the hope that it would be a good news story that could be told in other places and encourage other nations to also protect their sharks.

Why would they be concerned about that? Because over-fishing of sharks is a serious problem world-wide. Apart from endangering a number of shark species, it is feared that the effective removal of the top predators from marine ecosystems could have serious consequences. The widespread practice of removing sharks’ fins but discarding the rest of their body, to meet demands for shark fin soup in China, is a major contributor to over-fishing. The fact that shark fins consist of tasteless cartilage makes the practice even more tragic.

So the question for us was whether Palau made more money from using sharks to attract tourists than it would from killing them and selling their products. 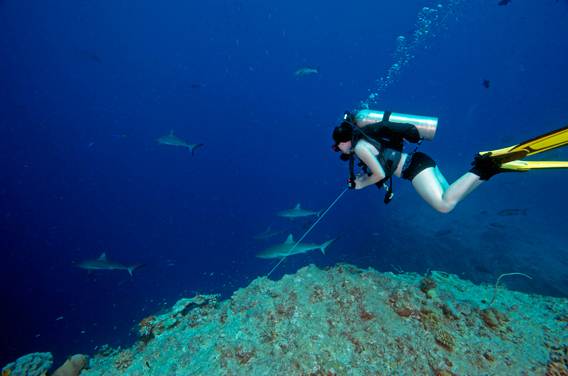 The analysis was based on extensive surveys in Palau (conducted by Gabe Vianna), collecting information from tourists, dive  operators, dive guides and fishers.  We were careful to limit results to tourists who stated that they went to Palau specifically to dive with sharks.

The results were quite remarkable. To quote from the paper:

“… we show that shark diving is a major contributor to the economy of Palau, generating US$18 million per year and accounting for approximately 8% of the gross domestic product of the country. Annually, shark diving was responsible for the disbursement of US$1.2 million in salaries to the local community, and generated US$1.5 million in taxes to the government.”

The answer to the question of whether it would be more profitable to catch the sharks was clear-cut:

“If the population of approximately 100 sharks that interact with tourists at popular dive sites was harvested by fishers, their economic value would be at most US$10 800, a fraction of the worth of these animals as a non-consumptive resource. Fishers earn more selling fish for consumption by shark divers than they would gain by catching sharks.”

There was a lot of interest in these results. We even got an article in the New York Times about them.

Now Gabe is repeating the study in Fiji, and there seems to be interest in it being done in other places as well.

One thought on “207 – Are sharks more valuable dead or alive?”