The concept of thresholds features prominently in ecology and resilience theory. The idea is that if a variable crosses a threshold value, an ecological system can change abruptly and substantially. How this affects decisions made by rational environmental managers can depend greatly on how uncertain they are about the value of the threshold.

The Resilience Alliance has an online database of “Thresholds and Alternate States in Ecological and Social-Ecological Systems”. It contains many examples including:

Thresholds are often talked about as if they are pretty black and white. If the variable is on one side of the threshold, the probability of a bad outcome is zero, whereas, if it is on the other side, the bad outcome is certain to occur (Figure 1). If you know that you are close to such a threshold, the benefits of taking action to avoid crossing it could be very  high.

For example, the decision might be, should we invest in actions to stop the management variable increasing slightly (moving to the right in Figure 1). If we know for sure that the variable currently has a value just below the threshold (e.g. 0.49 in this example), the benefits of investing in actions look high, as we can totally avoid the bad outcome.

In reality, though, when thinking about a decision that needs to be made about future management, we usually don’t know for sure whether there really is a clear-cut threshold, and even if we are willing to assume that there is one, we don’t know its value.

Instead, we might feel that there is a range of values that the threshold might take, and that these different values have different probabilities of actually being the threshold. In other words, we may be able to subjectively specify a probability distribution for the threshold.

Decision theory was developed for just such a case. It’s a way to account rigorously for uncertainty about a variable when trying to make a decision about what to do. It says that we should weight the outcomes of our decisions by their probabilities of occurring, and base decisions on the “expected value” of the outcomes. “Expected value” means the weighted average, allowing for different possible outcomes and their probabilities.

If we apply that to a case where we are uncertain about what the threshold is (like Figure 2), then the expected value of avoiding a small increase in the management variable is not  large, even if its current value is just below the best-bet value for the threshold. For example, in the numerical example in Figure 2, preventing an increase in the variable from 0.49 to 0.51 would reduce the probability of a bad outcome by only 4% (compared to 100% in Figure 1).

If allowing for  uncertainty about the value of the threshold  means that the estimated benefits of a management decision are very different, then the optimal decision about what to do could be quite different too.

Interestingly, even if you believe that there really is a sharp threshold, the effect of allowing for uncertainty about the value of the threshold is to smooth things out, so that the decision is no longer black and white, but is a shade of grey. The result is that the decision problem is rather similar to what it would be like if there wasn’t a sharp threshold at all, but a smooth transition between good and bad states.

To my mind, recognising realistic uncertainties about thresholds reduces their potency as an influence on decision making. It may result in reasonable decision makers choosing to take more measured actions than they would feel compelled to take if they believed that the problem was black and white. 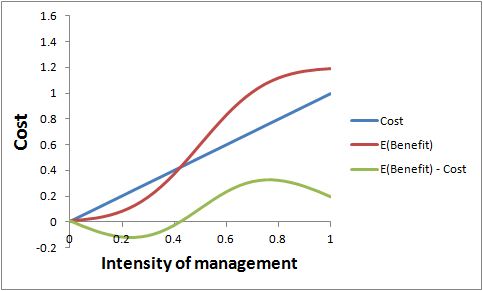 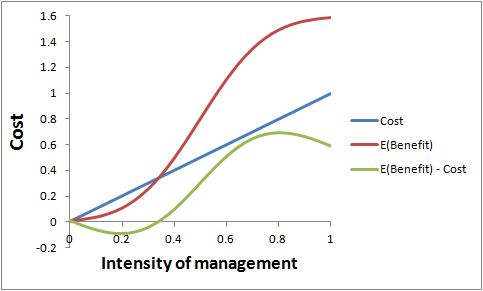