Almost all environmental programs are short of resources. Picking the best projects can make a huge difference to the benefits generated by a program.

There are more environmental projects available than can be afforded – often many more.

For example, a large national program in Australia recently funded around 5% of proposals received. Of course, proponents have already selected from among the available projects to some degree, so it was probably not more than 1% of potential projects that actually got funded.

Within the set of potential environmental projects, heterogeneity is enormous. They vary widely on every parameter: scale, feasibility, riskiness, importance to the community, likely compliance, costs, time frame, and so on.

As a result, the best projects are much, much better than the rest, meaning that programs can perform much better if they choose their projects well. Unfortunately, the importance of this is under-appreciated by most people involved in managing or participating in environmental programs. Many funded projects are mediocre, while great projects go unfunded or underfunded.

To illustrate how much it matters to focus resources on the best projects, the figure below shows a graph of the benefits and costs of around 7000 potential environmental projects in Australia (from Fuller et al. 2010, courtesy of Richard Fuller). Benefits are measured as the project’s contribution to protecting heavily cleared vegetation types. (See Fuller et al. 2010 for details.) It’s an incomplete measure of benefits, but it’s still useful to illustrate my point. 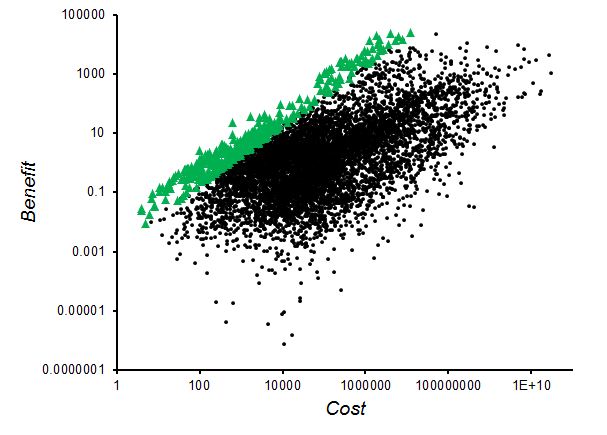 Note that the benefit and cost axes have been expressed in log scale to allow very small projects to be distinguished on a graph that includes some very large projects. The ranges of benefits and costs are enormous.

If we had enough money to fund 5% of the projects, the set that would generate the largest environmental projects would be the 5% with the highest Benefit: Cost Ratios (BCRs). These are shown as green triangles in the graph.

Clearly, if a program faced with these 7000 potential projects fails to fund the best ones, the loss to the environment would be extremely large. From an environmental perspective, it would be well worth putting resources, time and effort into evaluating the projects to identify the best ones.

Of course, picking cases with large potential BCRs is not enough. Delivering the potential benefits also requires that:

But accurately picking the best projects is a great start.

Boesso, G. And Kumar, K. (2007). Who or what really counts in a firm’s stakeholder environment: an investigation of stakeholder prioritization and reporting, “Marco Fanno” Working Paper N.51, IDEAS page for this paper