The wheat-growing areas of Western Australia are predicted to experience adverse climate change during the 21st century. Of the three components of change (rainfall, temperature and CO2) the first two are somewhat uncertain, but current modelling evidence suggests that great pessimism about future yields is probably not warranted.

Although there was quite substantial climate change in the Western Australia wheatbelt during the 20th century, it had little or no adverse consequences for wheat yields (PD229). Of course, it doesn’t follow that the same will hold during the 21st century. That will depend on the details of how much change occurs, and at what time of year it occurs. These details are highly uncertain.

Even the general pattern of future climate change is inherently uncertain, particularly in the long term. It depends in part on global emissions of greenhouse gases, which in turn depend on economic activity, technology change and climate policy measures over the relevant time frame. Uncertainty about each of these factors is high and increases with the length of time frame. In addition, the world’s climatic system is complex, chaotic and imperfectly understood, so that there is additional uncertainty inherent in the results of global circulation models, the tools used to predict climate.

Uncertainty is greater at the regional scale than at the global scale. And it is greater still when it comes to the within-year timing of changes in rainfall and temperature. We really have little idea about those timings, although they can be crucial in determining the consequences for crop yields (PD229).

Adverse changes in rainfall probably have the largest potential to reduce crop yields. Large reductions in September rainfall would be especially damaging. Unfortunately, rainfall is the factor about which we have the greatest uncertainty. Loosely speaking, regions that are already relatively wet are predicted to get wetter, and regions that are relatively dry (such as the Western Australian wheatbelt) are predicted to get drier, but in truth the models aren’t good enough to give us confidence about what will really happen in any particular place. CSIRO (2007) (somewhat heroically) predicted changes in annual average rainfall for the south-west of -20% to +5% by 2030 and -60% to +10% by 2070 relative to the period 1980-1999.

If the real results do fall within these ranges, 2030 would probably not be catastrophic, unless it includes a large reduction in early-spring rainfall. Clearly, -60% in 2070 would be catastrophic, but it’s the extreme case. Something nearer the midpoint of that range (-20%) would probably be damaging but not catastrophic. The real message about 2070 is that we have huge uncertainty about what rainfall will do – the range of the CSIRO predictions is 70%!

By 2050, increases in temperature could perhaps be somewhere in the range of 1 to 3 °C. A positive impact on yield of temperature increases up to 1–3 °C has been reported from relevant crop modelling results when assuming that temperatures increase by the same amount every day across the growing season. Positive yield impacts come from accelerated plant development, leading to avoidance of high maximum temperatures and water stress during grain filling.

Again, there is high uncertainty. Future temperature changes could be positive, negative or neutral for crop yields in Western Autralia.

CO2 fertilization of crops is a significant part of the climate/CO2 story (Attavanich and McCarl, 2012). In future, CO2 concentrations are likely to increase at about about 4 ppm per year. This is predicted to increase yields of current wheat cultivars in Western Australia by 15–30% over the next 50 years (Asseng and Pannell, 2012). Percentage increases in yield are likely to be greater in dryer agricultural regions, mainly due to increased water-use efficiency. Compared to the changes in rainfall  and temperature, the increases in CO2 are fairly certain. They are also constant all year, avoiding the tricky problem of predicting the within-year distribution of changes. 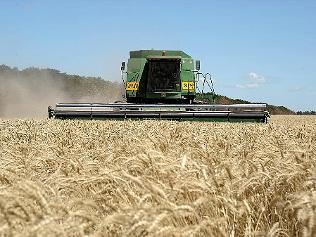 Highly adverse changes in rainfall and temperature would be really catastrophic for farmers in the Western Australian wheatbelt, but more likely the overall impacts will be moderate, particularly when the positive yield effects of CO2 fertilization are factored in.

Reinforcing that judgement, another new paper (Potgieter et al., 2012) concludes that, under a high-emissions scenario, different shires would see changes in crop yields by 2050 of −5% to +6% across most of Western Australia (and Victoria and southern New South Wales), even without allowing for CO2 fertilization.

I was surprised at how favourable those results are, especially considering that they are for a high-emission scenario. If they are accurate, then any negative impacts would be outweighed by the positive effects of CO2 fertilization.

I remember reading the original report of the Garnaut review, and being struck by how much it emphasised the risks to agriculture when justifying Australia’s need for a strong policy response to climate change. There certainly are risks to agriculture, but this evidence suggests that they are not as compelling a policy driver as Garnaut indicated. If Potgieter et al. are right, then I would expect that the ongoing decline in public investment in agricultural research will have far worse consequences for agriculture.

This Pannell Discussion draws on part of a paper I’ve recently published with Senthold Asseng, who’s now at the University of Florida (Asseng and Pannell, 2012).