Suppose that an environmental project in a government program requires some private citizens to change their behaviour or business management. An example would be a project that aims to encourage farmers to convert crop land into native forest. As well as generating environmental benefits and public costs (the cost of running the project), this project may generate benefits and costs to the private citizens whose behaviour would need to change. I’ll call these “private” benefits and costs.

The inclusion of private benefits is somewhat tricky and, in my observation, often poorly understood.

There are three reasons why the analyst might need to pay attention to private benefits and costs.

(a) The level of private benefits influences the behaviour of the private citizens who the project aims to influence.

(b) The level of private benefits should influence the choice of mechanisms used to try to encourage behaviour change.

(c) It may be appropriate to account for private benefits as one of the benefits of the project, which may affect the ranking of projects.

(a) is pretty obvious, but surprisingly it often gets overlooked. When judging the level of adoption/compliance that is likely (PD240), it’s important to think about the practices being promoted and consider how attractive they are to the people they are being promoted to. If the private benefits of the new practice are much greater than the private costs, adoption will be high, and vice versa. It’s not sufficient to consider the private benefits alone – you have to think about how they stack up against the private costs.

I should clarify that I don’t just mean private financial benefits and costs here. Non-financial benefits and costs should be considered as well, potentially including factors such as riskiness, convenience, complexity, compatibility with existing practices, social pressures, and environmental outcomes that matter to the private person whose behaviour is potentially changing. 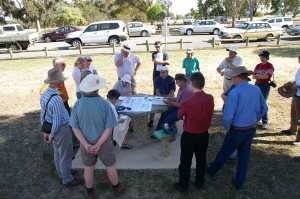 (b) is less obvious, perhaps, but also important. Agri-environmental programs in Australia have tended to over-rely on extension (information provision, awareness raising, etc.) to promote practices for which the private benefits are too low to outweigh the private costs. For those sorts of practices, something stronger, such as payments or regulation, would be needed to generate significant adoption, but of course these are more expensive approaches. For a project where private costs exceed private benefits, we face a trade-off that should be accounted for when the project is being evaluated. Extension is cheaper but generates little adoption, while payments or regulation generate more adoption but are more expensive.

In Europe, there is a tendency to use payments to farmers as the only response, even though extension might be sufficient (and much cheaper) in some cases. My Public: Private Benefits Framework is designed to help people think through these issues (Pannell, 2008).

(c) comes into play in some situations but not others. Including private benefits as a benefit of an environmental project is a can of worms, and they are unlikely to big in most cases anyway, so the brief, pragmatic version of my advice is, leave them out, unless one of the objectives of the program is to generate private benefits. The next few paragraphs explain why I say that.

One reason you might want to leave them out is that they are not the main reason for doing the project. You might consider that the focus should be on maximising environmental benefits and that chasing private benefits when selecting projects might compromise that. Given that your organisation is likely to have a certain focus or set of responsibilities related to the environment, perhaps this is reasonable (provided that you don’t also neglect private benefits when thinking about behaviour or mechanism choice).

An exception to this could be if the project makes the adoption occur sooner, by raising awareness of the new practice. The people who adopt sooner would benefit by getting the private benefits sooner than they would have (making them less affected by discounting – PD242). While that is worth something, research I was involved in in agriculture suggests that the difference in adoption timing is likely to be only a year or two, in which case the additional private benefit would be quite small.

If the payments are pitched at just the right level to offset the private losses, then they exactly cancel out. There is no private net benefit to include. If the payments are bigger than they need to be, such that the recipients make a net benefit even after allowing for their private costs of participating, then in principle that net benefit could be included in the formula, but the excess payment will also have to be included as a cost to the project (we’ll get to costs in PD245), in a sense cancelling out the benefit. This additional cost is unnecessary and will reduce the funding available for other projects, so rather than worrying about accounting for these private benefits, the best response is to get rid of any private net benefits by making sure that any private payments are not excessive.

So, as I said earlier, the inclusion of private benefits as one of the benefits from an environmental project is complex, and the net private benefits are likely to be small – close to zero in many cases. Unless they are considered particularly important for some reason, or are one of the objectives of the program, it is probably reasonable to round them off to zero and leave them out of the analysis.

That’s as much as I want to say about which variables should be included in the benefits part of the equation. I haven’t discussed factors like whether the project fits within the program scope. I recommend applying that sort of factor as a filter on which projects get considered, rather than as a variable within the benefits formula.