309. Why do fishers in Chile put up with poachers?

Fishers in Chile have been given exclusive rights to fish in particular areas, to give them an incentive to avoid over-fishing. In theory, they should be looking out for illegal poachers and reporting them to authorities, but they often don’t bother to do this. We wondered why.

Many fisheries around the world are over-fished, in some cases to the extent that the total catch of fish is less than it would be if fishing effort were reduced. Often, the over-fishing occurs because individual fishers have no incentive to reduce their own catch; if they do so, the fish they leave will be caught by other fishers, because the fishery is “open-access”.

Various policy approaches have been used to try to address this, including limits on fishing gear, limits on the length of a fishing season, and quotas on how many fish can be caught. A relatively recent approach has been the creation of Territorial User Rights for Fishers (TURFs). In this system, a group of fishers forms a cooperative, and they are given exclusive rights to catch the fish in a certain area (Wilen et al. 2012; Gelcich et al. 2012). 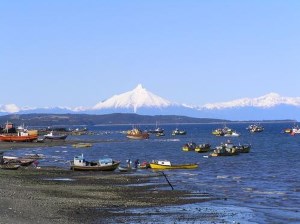 The idea is that, because other fishers outside the cooperative cannot come in and poach the conserved fish, members of the cooperative have an incentive to keep their own level of catch at a sensible level. Of course, this only works if the poachers are actually kept out.

One of my PhD students, Katrina Davis, was working on fisheries management in a part of Chile, and she found that fishers who were part of a TURF cooperative were often making no effort to detect poachers or report them to authorities. She wondered why.

One could imagine various reasons:

Katrina conducted a survey of the fishers to get to the bottom of this (Davis et al. 2017). She’s pretty fluent in Spanish, which would have helped.

She found that it was mainly about failures of government.

Fishers believe that “the judicial process in Chile does not sufficiently recognise the negative impacts of poaching, and that punishments are not sufficiently severe to deter poachers. Fishers also complained that government institutions, such as the navy or fisheries service, do not always respond to their distress calls when they detect poachers in their management areas.” (Davis et al. 2017, p.676).

Thus the government often fails to meet their side of the bargain. It would be really frustrating to fishers who went to the bother of reporting poachers only to find that their report was ignored, or that the poachers got off with trivial fines. No wonder they stopped monitoring or reporting the poachers.

What this amounts to is that the rights that have been allocated to the fishers’ cooperative are greatly diminished. They are rights in name but not in reality.

It highlights that even where a kind of privatisation approach is used to manage a natural resource, there continues to be a critical role for government to protect and enforce the rights that have been created.