Everybody knows that as a good becomes scarcer, its price is likely to go up. Scarcity can be a natural phenomenon, or can be induced artificially, such as by government restricting availability of the good. The latter can cause a variety of problems.

If a good becomes scarcer, suppliers know that they can put their price up. Some people will not be willing to pay that higher price, but that’s good because there’s not enough of it – it’s become scarcer. Only those who value it most highly will be willing to keep buying it. How much people  are prepared to pay depends on the nature of the good: just how important it is to people, and whether there are substitutes that people could make do with.

An extreme example is a very rare collectable stamp. For an avid collector these stamps are extremely important, and have no substitute, so their prices can reach remarkable heights. The most expensive stamp ever sold is a Swedish one from 1855, the Treskilling Yellow, which was accidentally printed on yellow paper, and exists  in only a single copy. It sold for $2.3 million in 1996.

In 2008 and again in 2011 world food prices rose dramatically. There were various contributing factors, but an important one was a perceived shortage of food.

In the case of a product like food, high prices act to fix the shortage. They prompt food producers to increase their output, so prices eventually fall back to something like their long-term trend level. That obviously can’t happen with a rare stamp (at least not without illegal counterfeiting, which is attempted from time to time).

Another case where increased supply cannot happen (at least not easily) is where the shortage is created artificially. Australia used to have many examples of agricultural products whose supply to Australian consumers was artificially restricted in order to jack up the price to benefit local farmers. The egg industry was an example. Farmers could only sell fresh eggs if they owned a quota. The quota limited production to a low level, so the price of eggs was pushed up.

This meant that some people ate fewer eggs than they would have preferred, and those who did eat them had to pay more than they should have had to. 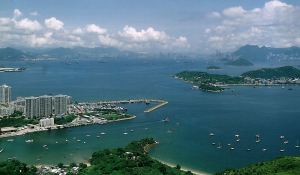 Another interesting example I heard about last week relates to artificial scarcity of golf buggies! Discovery Bay is a residential development on Lantau Island, which is part of Hong Kong. No cars are allowed in the development. If people aren’t prepared to walk, their only options are to catch a bus or buy one of the 500 golf buggies that are available to the residents. There are 18,000 residents, so competition for the strictly limited number of golf buggies is intense. When one is sold from one resident to another, its price can reach as high as HK$2.2 million (around $280,000 – enough for an extremely luxurious car).

It is not actually the buggies themselves that are worth this much. If you took one of the golf buggies outside of Discovery Bay, it would be worth what golf buggies are normally worth – perhaps a couple of thousand dollars. What is worth so much is the right to use one of these buggies within Discovery Bay. 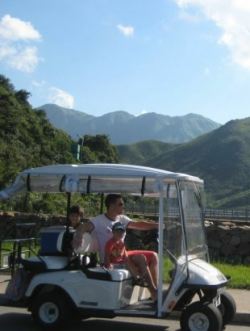 This example has a difference to the eggs case, in that eggs are bought to be consumed once, whereas the golf buggies are durable and can be resold. This adds to their tendency to become expensive. For eggs, the additional price as a result of the quota restriction on supply reflects the amount that some people are prepared to pay to consume eggs. In principle, in a perfect market for these golf buggies, people would be willing to pay more and more until the interest cost on their capital tied up in the buggies equalled the benefits they got from the use of the buggies. It is really only the interest that people are giving up by owning a buggy, not the capital, because they can sell the buggy at any time and liquidate the capital. So if the interest rate was 5%, the price of golf buggies would be something like 20 times their value outside the development. If that’s the relevant interest rate for residents in  Discovery Bay, it implies that the marginal annual benefit from use of the buggies is around $14,000. That’s a lot – around $270 per week!

I wonder if the developers thought this through when they set up the buggy system. Clearly only wealthy residents of Discovery Bay would own the golf buggies. I wouldn’t be surprised if this causes tensions. Also, I bet the scarcity and high prices put pressure on the controllers of the system from both sides. People who don’t own buggies but would like to own one would be pushing hard for an increase in the number of buggies that are available. People who do already own buggies would be fighting ferociously to maintain the existing limit, so that the value of their asset is not reduced. With foresight, the system could have been designed to avoid this problem, by defining the rights to use a golf buggy to be temporary (e.g. for a year) rather than permanent. The price would not have exploded so much (it would reflect just the annual use value), and flexibility would be easier because owners would not have lost anything if the number of buggies allowed was increased. You’d have to create a set of permits to use golf buggies (somewhat like permits to emit carbon dioxide in an emissions trading scheme), rather than the buggies themselves implicitly being the permits.

Beck, A. (1974). The social cost on production control in the Australian egg industry, Review of Marketing and Agricultural Economics 42, 240-256. Downloadable at IDEAS here.