Episode 5 in this series on principles to follow when ranking environmental projects. This one is about how to estimate the value or importance of environmental assets, and how to include that in the ranking process.

We’ve seen that measuring the benefits of an environmental project requires attention to two aspects: the change in the physical condition of the environment, and the resulting change in the values generated by the environment (PD238). Suppose we have information about the change in physical conditions. How should we convert that to a measure of value or importance that we can use to rank projects? We need to do this in a way that is consistent between the different projects that we’ll want to compare.

Let’s consider three options, which are quite different in nature, but which are all actually used in real-world environmental programs.

Scientists often use rules of thumb (sometimes captured in an ‘Environmental Benefits Index’) to evaluate the relative importance of different potential environmental investments. An Australian example is the ‘habitat hectares’ concept, which is used by the state government in Victoria to evaluate proposed projects. A US example is the Environmental Benefits Index developed by the Natural Resources Research Institute (NRRI) of the University of Minnesota Duluth (http://beaver.nrri.umn.edu/EcolRank/). This consists of measures of soil quality risk, water quality risk and habitat quality, each scored out of 100, and then added up to give a total score out of 300.

Key strengths of this approach include:

But it also has some weaknesses:

‘A “deliberative process” is a process allowing a group of actors to receive and exchange information, to critically examine an issue, and to come to an agreement which will inform decision making’ (Gauvin 2009). It involves discussion, debate, and consideration of all information that is considered relevant. Multi-Criteria Analysis often employs this approach, although other approaches can use it as well.

Environmental economists put a lot of effort into valuing environmental benefits in dollar terms, using a variety of techniques. (See PD218 to PD221 for details.)

Some people are quite definite in their preferences for one or another of these approaches, or particularly dislike one of them. In my view, it’s not a clear-cut decision. They each have pros and cons, and one’s choice of which to use may vary depending on the circumstances. The weaknesses that concern me most are: the inability of many Environmental Benefits Indexes to compare outcomes with and without the project; the excessive flexibility of some deliberative approaches, giving participants the flexibility to do dumb things; and the expense of doing comprehensive valuation surveys. 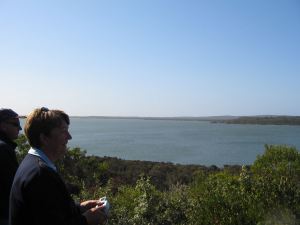 My advice is to weigh up the pros and cons and use whichever approach makes most sense for a particular program. My caution would be that this advice applies specifically to the part of the process that estimates values. For the other parts of the process, and for decisions about how to combine the various bits of information to inform decisions, see the other posts in this series.

In developing INFFER (Pannell et al. 2012) we attempted to create an approach to valuation that draws on the combined strengths of the three approaches outlined above, while limiting their weaknesses. The approach we developed:

Now V(P’) is the value of the environmental asset at condition P’. It includes all the different types of values (market and non-market) that are relevant to this environmental asset. In Figures 4 and 5, if P’ = 100, V(P’) would be $1 million.

Then we measure the project benefit as V(P’) × W:

In INFFER, we ask users to score V(P’) relative to a set of examples – a table of well-known environmental assets with suggested V(P’) scores. We define V(P’) as being worth $20 million per point. This is often done in a group discussion environment, involving a variety of stakeholders.

A risk with this (and other deliberative processes) is that people may provide values that are too high (e.g. see PD213). A process of reviewing assumptions and comparing them across projects is needed to reduce this risk.

Defining W as a proportion of V(P’) helps to highlight that the benefits of the project must be proportional to the effectiveness of the project, which is often missed when people develop their metric for ranking projects.

Finally, a mistake I’ve seen is to exclude any measure of values from the ranking process. One senior bureaucrat told me that she was opposed to including them because of the risk of them generating controversy. At other times, people seem to simply overlook them. The consequence of this is that the organisation will tend to bias its funding towards less valuable projects. There is an increased risk that they will incorrectly rank projects addressing less-valuable assets relative to more-valuable assets.