There is clear evidence that violence within and between human societies has decreased dramatically through the course of human history. What are the links between economics and this most-welcome development?

I remember thinking that I was very lucky when I was about 11 or 12 years old, because I felt that the world was on a pathway to improvement. I was glad to be living now, rather than earlier in history, because medicine and technology were clearly advancing, but also because I felt that people were generally getting better – kinder, more inclined to offer international aid, more opposed to war.

The idea that people are getting better might seem like childish wishful thinking, but it turns out there was something to it. So says Steven Pinker in his extraordinary 2011 book, The Better Angels of Our Nature: The Decline of Violence in History and its Causes.

Pinker was already one of my favourite authors (How The Mind Works is wonderful), but this book is really special. I can’t recommend it highly enough. It is enthralling, surprising, entertaining and even inspiring, over the course of a weighty but highly readable 800 pages.

Reductions in violence have been documented on every time scale, from millennia to recent decades. Pinker documents how every form of violence you can imagine has declined: murder, violent punishments, torture, mutilation, slavery, rape, genocide, war and more. Beneficiaries have included women, children, family members, neighbours, strangers, homosexuals, prisoners, slaves, animals … everybody, really. 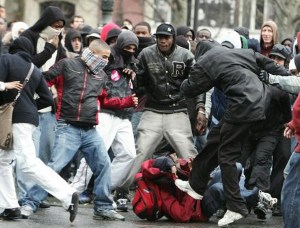 As Pinker observes, “It is easy to forget how dangerous life used to be, how deeply brutality was woven into the fabric of daily existence”. The good old days were, in fact, shockingly violent.

The declines in violence have been huge in magnitude. Acts of violence that we would consider unthinkable were once commonplace and unremarkable. To quote a few of the many statistics provided, in pre-state societies, around 15% of people were killed by other people; in early city states this had dropped to 5%; and the current value in Europe is around 0.001% per year.

Many different factors have contributed to this outcome, some rather surprising. I was interested that some of the reasons identified by Pinker relate directly to economics.

He argues that one of the biggest contributing factors has been “gentle commerce” – voluntary trade between willing buyers and sellers. If your way of acquiring goods is to take them from your neighbours by force, then the system is a zero-sum game, meaning that there is a fixed amount of good stuff available, and if someone gets more of it, someone else must get less. If in the course of taking your neighbours’ goods you also kill them, the system is very much a negative-sum game. But if you trade, it becomes a positive sum game, with everybody better off.

The gains from trade make it more likely that people will choose to leave their neighbours alone to produce good stuff for trade, rather than choosing to raid and perhaps kill them.

Trade brings you into direct contact with a broader range of people, and you can learn that they are not the ogres you’ve been led to believe. The process of negotiating particular trades encourages each player to take the other’s perspective. It may lead to respectful consideration of the other’s interests, if only because it becomes in your interest to do so.

This virtuous spin-off from trade, including from “globalisation”, is something that very few people seem to be aware of. No doubt there are some negative aspects of globalisation, but this perspective on violence adds a huge positive to the more obvious positive of increasing general prosperity.

The evidence for reduced violence resulting from trade is strong. For example, statistics show that countries that trade with each other are much less likely to go to war. Countries that have relatively high levels of trade have experienced less genocide and less civil war.

Interestingly, it appears that increased wealth per se (which would result from the trade) may not be the main factor driving reductions in violence. Pinker shows that the evidence about the effect of wealth is mixed; its correlation with violence tends to be low. For example, the number of lynchings in southern US states declined exponentially in the first half of the 20th century, without deviations downwards for the roaring 20s or upwards for the depressed 30s.

So if it’s not wealth, it must be the act of trading itself. That’s a remarkable and important insight. Given that trade has this unintended positive consequence that benefits us all so much, it’s ironic that some people see commerce and trade as undesirable, or even immoral.

Pinker, S. (2011) The Better Angels of Our Nature: The Decline of Violence in History and its Causes, Allen Lane, Penguin, London.