Last time I talked about the way that economic trade has contributed to reductions in certain types of violence. Another economics-related influence was the establishment of powerful centralised governments, which claimed a monopoly in the rights to apply violence within the community. The links to economics are various.

Steven Pinker (2011) refers to this influence on violence as “The Leviathan”, meaning a state that claims a monopoly on violent force and uses that monopoly to protect its citizens from each other.

This reminded me of the economic concept of a natural monopoly – a situation where a monopoly can deliver an outcome more efficiently and cheaply than can multiple players in a competitive market. Normally this is thought to apply to services like trains, roads or domestic water, but the discerning use of violent force to reduce general violence does seem like a good candidate for a natural monopoly. Imagine what would happen if there was more than one provider of this “service”! 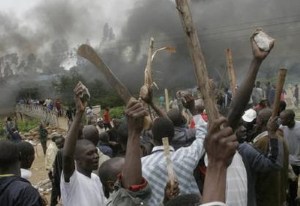 The Leviathan idea also relates to the economic theory of public goods, which have either or both of two characteristics: the provider cannot exclude people from benefiting from the goods in question (and so cannot charge a voluntary fee in exchange for their consumption) and/or consumption of the good by one person does not diminish its availability to other people (see PD22). Violence-reduction services would have both of these characteristics, and so economists would consider them to be prime candidates for being provided by a centralised government, rather than by multiple firms in a free market.

Next, there would be positive externalities (PD35) resulting from individual decisions not to apply violence to others in their community. A positive externality is where somebody gets a spill-over benefit from someone else’s activities. Pinker showed that the violence-reduction benefits of a benevolent central government diffuse throughout the society. One way is through growth of culture and technology, as people have more time and resources to devote to these things rather than to self-defence. Fostering of positive externalities is another classic economists’ rationale for government getting involved in an issue, rather than leaving it to solely to the market.

We heard about the violence-reducing benefits of trade (PD269), but this too depends on a strong centralised government to provide the conditions and institutions for trade to occur. A benevolent Leviathan helps us all by defining and enforcing property rights, providing the rule of law, creating a system of contracts, and punishing violators of these systems. Without these things, trading would be much more expensive and therefore less common. In other words, the strong centralised government, by providing these systems and institutions, reduces our “transaction costs” (see PD192), making trade practically possible. Transaction costs have been a growing area of study in economics, recognised with recent Nobel prizes.

One of the mechanisms for reducing transaction costs is increasing trust. It’s easy to see how the systems and institutions put in place by a benevolent Leviathan would lead to increased trust between people. Social scientists, including economists, have studied trust as a key element of “social capital” (see PD170), looking at how it contributes to making economies and societies work effectively, for the benefit of all.

So there are at least three or four ways that economic theories can add richness to Pinker’s Leviathan idea.

Overall, it is striking how many connections there are between economics and the long-term reduction in violence outlined by Pinker. He doesn’t talk about these connections (apart from the “gentle commerce” one), but it seems there could be scope to explore them further.

Pinker, S. (2011) The Better Angels of Our Nature: The Decline of Violence in History and its Causes, Allen Lane, Penguin, London.