I just noticed (a few months late) that it’s been 10 years since I started writing Pannell Discussions. Time for some reflections on the benefits and costs of doing so.

In 2004 I decided I wanted to increase my outreach to non-economists and to people outside academia. I wanted to put out material that would be interesting and engaging, and would increase people’s understanding of economic issues in agriculture and natural resource management.

I decided to write brief articles on a range of topics, and put them on my web site. Initially I didn’t think of this as being a blog, but eventually I accepted that this is what it is.

I adopted a few rules for myself. Firstly, I had to enjoy it. If it became a burden I would stop, or if other work was too demanding I would give it a rest. (Work has been demanding this year, hence the relatively low frequency of posts.) Secondly, each post had to be a manageable amount of work. I originally set myself a target of one hour per week. Eventually, it worked out that I was spending about two hours per post (including managing the web site), and doing one post about every second week, so the one-hour rule worked out. Thirdly, I decided only to write about things I know about or am interested in, to avoid having to do a lot of extra work to prepare each post.

I started with signing up some friends and colleagues as subscribers and let the subscription base grow fairly organically. It is now up to almost 700 subscribers, plus a lot of non-scribers look at the posts. The more popular posts get around 1000 readers. 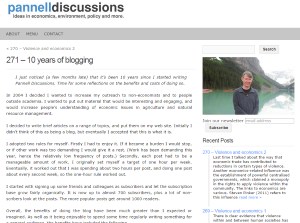 Overall, the benefits of doing the blog have been much greater than I expected or imagined. As well as it being enjoyable to spend some time regularly writing something for a general audience, the benefits have included the following.

I’ve partly used the blog to raise awareness about my research and its implications. Some of the posts are based on one of my published research papers, and many posts include one or more of my papers as further reading. This has meant that more potential users of the research find out about it, and sometimes it’s led to actual usage of the research.

Some of my readers are other researchers, some of whom end up citing one of my papers in their research publications, as a result of having seen it on the blog.

In some cases, I’ve used the process of writing the blog as a mechanism to work out my thoughts on an issue, or to force myself to focus on the practical implications of a piece of research I’ve done. Occasionally, feedback from commenters helps with this, but mostly it’s just the fact that I know there is an audience of general readers who are going to look at it that makes me think about it more clearly from a practical perspective. A number of published papers have benefited from this prior public scrutiny of aspects of them.

There has even been one case where a blog post (PD175) generated ideas that led to research and a journal publication that wouldn’t otherwise exist (Rogers et al., 2014), which was then described in another blog post (PD256).

Beyond the more research-oriented posts, the blog posts take a number of different approaches, from time to time, including:

Doing the blog has definitely meant that more people know about me and my work. I sometimes meet people who read my blog but otherwise wouldn’t know I existed and may never have heard of environmental or agricultural economics. Or my wife meets someone who asks whether she’s related to Pannell Discussions. Some people seem to think I’ve got more expertise than I really have, because they’ve seen a blog post I wrote about something.

The main cost has been time but, as I said earlier, that hasn’t been excessive.

I haven’t found it difficult to identify enough topics to keep it going. If I don’t have a topic, that’s fine, I don’t write a post. But usually there are one or two topics in the queue.

Overall, it’s been a great thing to do, and I’ll keep on doing it when time allows.