Following the catastrophic result of the US unpopularity contest last week, one of the many suggested explanations was the level of economic inequality in the country. This made me think of the graph below, which I saw last year. It shows that, when it comes to inequality, the US is truly exceptional. 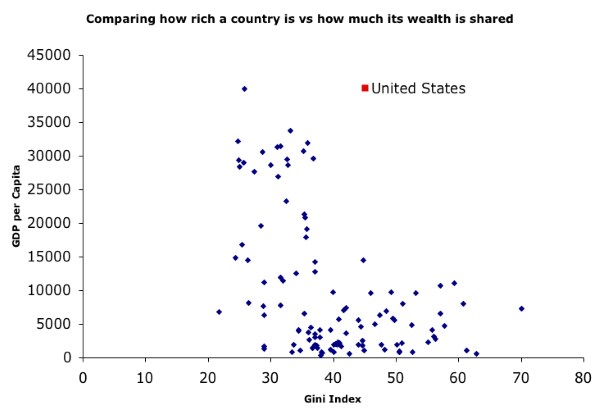 The exception is the US, which has both high average income and high inequality. There is a lot of wealth in the US but it is concentrated into a minority of hands. As one illustration, between 2009 and 2012, 95% of income gains in the US accrued to the top 1% of income earners. Other data seems to show that their inability to share around the wealth has become worse over time. Other countries with a similar level of inequality have about one eighth as much average income.

On the other hand, inequality was clearly not the only factor. Already, like-minded politicians around the world are feeling empowered and emboldened to spread their noxious views throughout their societies. We can see that happening in Australia, France and The Netherlands, for example.

And there seems plenty to worry about from what could now happen in the US. The world’s most powerful country will soon be led by a deeply ignorant man of appalling values and character. Even by the low standards of politicians, he tells obvious lies to an extraordinary extent. I feel angry that so many Americans were taken in by this conman, and now the whole world will have to suffer the consequences.

The other thing I can’t stop thinking about is a certain historical parallel. Can you think of another prominent national leader from the 20th century who was elected on a promise of making his country great again? This other leader also used an ethnic minority group as a scapegoat for his society’s problems, and found a sympathetic ear from countrymen who felt they had been badly treated. He had notable authoritarian tendencies, fomented hatred and resentment, was not averse to jailing his political opponents, did not respect the rule of law or democratic institutions, and was unable ever to admit that he had made an error. He excited mobs with messages that were simple and bold but facile and dangerous. He was friendly with other authoritarian leaders (although that didn’t last). And he had a distinctive hair style.

I’m not expecting that the US will now proceed to annex Alberta as a prelude to invading all of the countries they can practically get to, but I do think there is a serious risk that voices of reason, balance, kindness and openness within the country will be repressed and perhaps even persecuted. We have to hope that good Americans will be able to moderate or even prevent the barrage of stupid and repugnant policies that will now come forth.