Sometimes Benefit: Cost Analysis is criticised because it doesn’t address questions of fairness (or “equity”). To what extent is that a fair(!) criticism?

This issue is encapsulated in the question, who gains and who loses as a result of the project we are evaluating? This includes financial gains or losses, but also other non-financial aspects, such as health or environmental quality.

You can answer that “who gains, who loses” question as an issue of fact, without getting into fairness issues. But it does beg two questions that are directly about fairness.

Firstly, are the gainers different from the losers? Maybe one group of people bears all of the costs but a different group reaps all of the benefits. If so, that in itself could be viewed as a problem. The “beneficiary-pays principle” is a statement about who should pay that is based on a particular view about what is fair. It might prompt the agency to try to reduce the disparity between who benefits and who loses.

On the other hand, there is nothing objectively true or correct about “beneficiary pays”. Indeed, it might conflict with other rules of thumb that are used to judge fairness, such as the “polluter-pays principle”.

The second question is, are the gainers relatively advantaged already, or the losers relatively disadvantaged already? If so, we might be inclined to tone down how good we think the project is. This relates to a different rule of thumb about fairness: something like, “more equality of outcomes is better”. This too could potentially be in conflict with the “beneficiary-pays principle”. All this highlights that fairness is very complex and somewhat in the eyes of the beholder.

It is true that BCA, as usually practiced, does not factor these fairness issues into its overall assessment of a project using its standard metrics: Net Present Value or Benefit: Cost Ratio (or Internal Rate of Return if anyone insists on using that problematic metric). When applied to the whole project, these metrics take no account of who gains or who loses and they ignore the fairness questions that flow from there.

On the other hand, the results generated from a BCA are not limited to those standard metrics. It is quite possible to keep track of who in society gets how much of each benefit and who pays each cost and include that information in a table in the BCA report. I do this in my BCA spreadsheet (the INFFEWS BCA Tool), and some BCA guidelines recommend that it should be done as a routine practice. For example, the Australian Government’s guidelines say that “this need is best met by including a distributional incidence matrix, which sets out the identity of groups or communities which gain or lose from the project or programme, and the expected size of those gains and losses.” (Commonwealth of Australia, 2006, p. 15).

It is relevant in the context of international development as well. “Disaggregating income changes for different stakeholder groups in an unweighted form is potentially very useful. … It allows an estimate of how the poor are affected by a project and thus the extent to which a project helps achieve the objective of poverty reduction.” (Asian Development Bank, 2013, p.19). The ADB also points out that information about the distribution of benefits and costs has other benefits as well, not related to fairness: “It allows an assessment of whether the return to investors is sufficient for a project to be financially sustainable. By estimating the change in government income, it allows an assessment of the fiscal impact of a project.” (ADB, 2013, p.19).

Under this approach, the BCA itself is not giving explicit advice about how much weight should be given to the level of disparity between gainers and losers, or on how things should be adjusted depending on whether gainers or losers are relatively advantaged or disadvantaged, but the decision makers might actually prefer to make their own judgements about that. It’s an additional consideration for them to think about on top of the NPV or BCR.

There is a version of BCA that does address fairness directly and explicitly. In this version, the analyst applies different weights to different groups when calculating NPV or BCR. However, “this has been an area of controversy and in practice systematic weighting of project outcomes has rarely been carried out.” (Asian Development Bank, 2013, p.16).

The Australian Government’s advice is that it’s not even a good idea to try to do this. They argue that, while distributional effects, in principle, “can be overcome by assigning differential weights to the income changes which accrue to different social groups, the judgements entailed in the approach are almost always most appropriately made by government at the political level.” (Commonwealth of Australia, 2006, p.xiv).

Stepping back from these questions about how to do a BCA, there are a couple of other big-picture questions we should consider. Firstly, should every project that gets funded be fair, in the sense of benefiting everyone equally? Clearly, that’s not practical, and it’s arguably not even desirable. We can probably achieve more overall by having a diverse portfolio of projects that are designed to deliver specific outcomes, and it’s inevitable that any particular outcome will benefit some people more than others. It’s not a good idea to aim for everybody to benefit from every project or policy. Adopting that aim will probably make everybody worse off overall.

Furthermore, is adjusting BCAs to include weights for different groups the best way to deliver a fair society overall? Again, probably not. We have a welfare system, progressive income tax, and similar measures, and they are probably better mechanisms for delivering social equity than compromising the delivery of, say, environmental outcomes by forcing environmental projects to also serve as welfare policies.

In summary, it’s true that BCA, as normally practiced, does not include weights to reflect the relative importance of delivering benefits to or imposing costs on different groups in society. However, on balance, that is probably appropriate. BCA can still be extremely useful to decision makers concerned about fairness because it can provide information about the distribution of benefits and costs between different groups. Decision makers can then use their own judgements when factoring that information into their choices.


Playlist of videos for all five BCA Criticisms

If you are new to BCA, here is a very introductory course, in 10 videos totalling 1 hour 14 minutes. 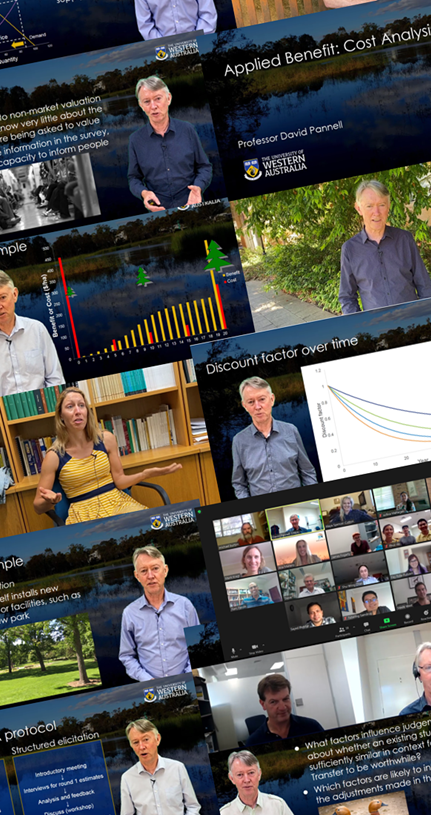 For details of content, timing, pricing and how to apply for discounts or a bursary download this flier:

The course will run again soon, starting on 28 February 2022. To enrol click here or on the image at left.

“A fantastic program and course. It is by far the best course I have been involved in. I learned so much and there is still lots to learn which you have shared with links so I can return to refresh/learn as needed.”

“Taught in an engaging way with many real-world examples.”